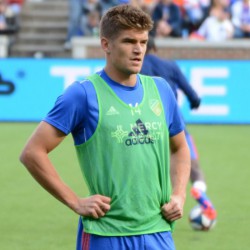 Nicholas "Nick" Hagglund (born September 14, 1992) is an American professional soccer player who plays as a defender for Toronto FC in Major League Soccer.

Career
Xavier University
Hagglund played four years of college soccer at Xavier University. He made 81 appearances, starting in 80, while scoring four goals and adding 11 assists. Hagglund was named Big East Defensive Player of the Year for 2013, along with First Team All-Big East honors. During his collegiate career he has also earned A-10 Defensive Player honors, and was named to the Atlantic 10 All-Conference First Team. In his freshman campaign he was named to Atlantic 10 All-Rookie Team and Atlantic 10 All-Tournament Team.

Toronto FC
On January 16, 2014 Hagglund was drafted in the first round (10th overall) of the 2014 MLS SuperDraft by Toronto FC.

Hagglund made his professional debut in a 2–0 win over the Columbus Crew on April 5, 2014.

On September 27, 2014 Hagglund scored his first 2 goals in a 3–2 come from behind home victory against the Portland Timbers.

On November 30, 2016, Hagglund scored the goal that put Toronto FC ahead 3–2 against the Montreal Impact in the Eastern Conference Final. This tied the aggregate score at 5–5, and sent the game into extra time. Toronto FC went on to score 2 in extra time to win the game 5–2 and earn their first-ever appearance in the MLS Cup against the Seattle Sounders.