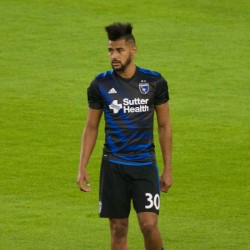 Anibal Casis Godoy Lemus (Spanish: ; born 10 February 1990) is a Panamanian footballer who plays as a midfielder for the San Jose Earthquakes and the Panama national football team.

Club career
Godoy started his career at Chepo and moved abroad in November 2011 to join Godoy Cruz on loan to play alongside compatriot Armando Cooper after being voted Player of the Year in Panama. After returning to Chepo he moved to Europe in August 2013 when he signed for Hungarian side Honvéd Budapest. He made his debut for them on 1 September 2013 against Kaposvár Rákóczi.

International career
With the Panama Under-20 team he participated in the 2007 FIFA U-20 World Cup in Canada.

Godoy made his senior debut for Panama in a March 2010 friendly match against Venezuela and has, as of 10 June 2015, earned a total of 49 caps, scoring 1 goal. He represented his country in 14 FIFA World Cup qualification matches and played at the 2011 and 2013 CONCACAF Gold Cups.

Godoy represented Panama in all four of its 2017 CONCACAF Gold Cup matches, comprising three group stage matches and one quarterfinal. He tallied one assist and was named to the Best XI of the group stages, but ultimately scored an own goal in Panama's quarterfinal match against Costa Rica and club teammate Marco Ureña, resulting in the end of the tournament for Panama and Costa Rica's advancement to the semifinals.