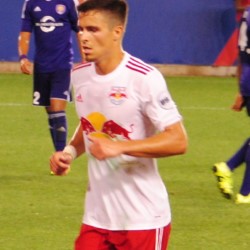 Florian Valot (born 13 February 1993) is a French footballer who plays as a midfielder for New York Red Bulls in Major League Soccer.

Career
Early career
During his youth years, Valot was a member of the Paris Saint-Germain F.C. youth system as well as the AS Monaco FC's reserve team for three years. In 2014, Valot moved to the United States to attend Rider University on scholarship as a member of their soccer team. During his two years at the school he appeared in 34 matches tallying 13 goals and 6 assists.

Valot was a member of the New York Red Bulls II preseason squad as a trialist in 2016 and appeared in three games for their U-23 team.

Professional
On 25 June 2016, Valot signed with American third division side and New York Red Bulls affiliate club, New York Red Bulls II in the United Soccer League. The following day, Valot made his first appearance with the club in a 4–0 victory against the Wilmington Hammerheads, where he recorded an assist on the second goal of the match. On 19 July 2016 Valot scored his first goal as a professional scoring a late winner in a 2–1 victory over FC Cincinnati. On 16 October 2016, Valot scored the equalizing goal for New York in a 1–1 draw with Louisville City FC, a match in which New York advanced to the 2016 USL Cup Final on PKs, 4–3. The following week Valot helped the club to a 5–1 victory over Swope Park Rangers in the 2016 USL Cup Final.

Valot started the 2017 season as the Captain of New York Red Bulls II, scoring in a 3–3 draw with the Pittsburgh Riverhounds. He ended the season appearing in 32 matches and scoring ten goals and recording seven assists.

Valot was sent back on a temporary loan to affiliate side New York Red Bulls II during March 2018. On 17 March 2018 he captained the side in a 2–1 victory over Toronto FC II, assisting Andrew Tinari on the game-winning goal. Valot was recalled to the first team and on 31 March 2018 scored his first goal for New York Red Bulls in a 4–3 loss to Orlando City SC. On 28 April 2018, Valot scored his second goal of the season, helping New York to a 3-2 victory over Los Angeles Galaxy. On 5 May 2018, Valot recorded a goal and an assist in a 4-0 derby victory over New York City FC. On 8 July 2018 it was announced that Valot had suffered a torn ACL and would be out for the remainder of the season. Prior to the injury Valot had established himself as a starter in his first season with the first team.