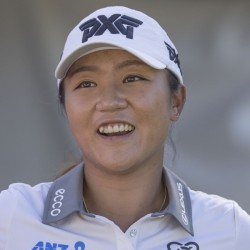 Lydia Ko MNZM (born 24 April 1997) is a Korean-born New Zealand professional golfer who became the No. 1-ranked woman professional golfer on 2 February 2015 at 17 years, 9 months and 9 days of age, making her the youngest player of either gender to be ranked No. 1 in professional golf. Upon winning The Evian Championship in France on 13 September 2015, she became the youngest woman, at age 18 years, 4 months and 20 days, to win a major championship. Her closing round of 63 was a record lowest final round in the history of women's golf majors. On 3 April 2016, she won the ANA Inspiration, for her second consecutive major championship, where she also became the youngest player to win two women's major championships. Since turning professional in 2014, Ko has career winnings of $10,031,335 as of 21 September 2019. Additionally, she is the first LPGA Tour player to win at least $2,000,000 in each of her first three full seasons on Tour.

She had been the top-ranked woman amateur golfer in the world for 130 weeks when she announced she was turning professional on 23 October 2013. She became the youngest person ever to win a professional golf tour event and youngest person ever to win an LPGA Tour event. In August 2013, she became the only amateur to win two LPGA Tour events. As an amateur she never missed a cut in 25 professional tournaments, and by September 2013 had risen to fifth in the Women's World Golf Rankings in only 23 professional tournaments. Ko played her first LPGA Tour event on 9 February 2012 (14 years, 9 months, 16 days) and made the cut in her first 53 consecutive LPGA Tour events through 4 June 2015 (18 years, 1 month, 11 days) until she missed the cut at the 2015 KPMG Women's PGA Championship. Since that lone missed cut, Ko has made the last 36 consecutive Tour events and counting (as of 28 November 2016).

On 22 November 2015, Ko won the LPGA Rolex Player of the Year Award by two points over Inbee Park, making her the youngest winner in the 49 years of the award.

In both 2014 and 2015, Ko has been named in the EspnW Impact25 list of twenty-five athletes and influencers who have made the greatest impact for women in sports.

At the Rio Olympics, in August 2016, Ko won the silver medal in women's golf.

In the 2019 New Year Honours, Ko was appointed a Member of the New Zealand Order of Merit for services to golf.