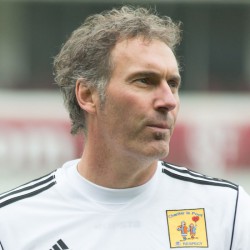 Laurent Robert Blanc (born 19 November 1965) is a French professional football manager and former player. He was most recently the manager of Paris Saint-Germain. He has the nickname Le Président, which was given to him following his stint at Marseille in tribute to his leadership skills.

Blanc played professional football for numerous clubs, including Montpellier, Napoli, Barcelona, Marseille, Inter Milan and Manchester United, often operating in the sweeper position. He is also a former French international, earning 97 caps and scoring 16 international goals. He represented the country in several international tournaments, including the 1998 FIFA World Cup and UEFA Euro 2000, both of which France won. On 28 June 1998, Blanc scored the first golden goal in World Cup history against Paraguay.

He began his managerial career at Bordeaux in 2007, winning domestic honours including the 2008–09 Ligue 1 title. After leaving Bordeaux in 2010 he became the manager of the French national team until 2012, replacing Raymond Domenech in the wake of the 2010 FIFA World Cup and leading the country to the quarter-finals of UEFA Euro 2012. In 2013, he was hired by Paris Saint-Germain, winning further honours. After three successful years with Paris Saint-Germain he left the club in June 2016.