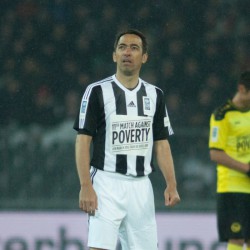 Youri Raffi Djorkaeff (born 9 March 1968) is a French former professional footballer who played as an attacking midfielder and a forward.

Throughout his club career, he played for teams in France, Italy, Germany, England, and the United States.

At international level, Djorkaeff scored 28 goals in 82 appearances with the French national team between 1993 and 2002. He won the 1998 FIFA World Cup, Euro 2000, and the 2001 FIFA Confederations Cup, also taking part at Euro 1996 and the 2002 FIFA World Cup. He is the son of former player Jean Djorkaeff. On hanging up his boots in 2006 and after having played in France, Italy, Germany, United Kingdom and the US, Youri devoted himself to social projects, which eventually led him to establish the Youri Djorkaeff Foundation in 2014. He currently holds the position of CEO of the FIFA Foundation, following his appointment in September 2019.