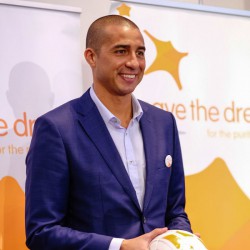 David Sergio Trezeguet (born 15 October 1977) is a French former footballer who played as a striker.

Trezeguet began his career in Argentina with Club Atlético Platense at the age of eight, progressing through their youth system to their first team, where he made his debut in the Primera División in 1994. After one season, he transferred to Ligue 1 side AS Monaco, where he would form a striking partnership with international teammate Thierry Henry, winning the league in the 1996–97 season. He left the club in 2000, having scored 52 goals in 93 Ligue 1 appearances and having claimed two Ligue 1 championships and the 1997 Trophée des champions. In 2000, Trezeguet signed for Serie A club Juventus for a transfer fee of £20 million. With 24 goals, he was the joint recipient of the Capocannoniere award for top scorer as his team won the 2001–02 Serie A title; Trezeguet also scored eight goals in 10 Champions League appearances as Juventus reached the second round of the tournament. Despite struggling with injuries the following season, he won another league title with the club, and also scored four goals in 10 Champions League appearances as Juventus reached the final of the tournament, eventually losing 2–3 on penalties to Milan, as Trezeguet missed his spot kick in the resulting shoot-out. Overall, Trezeguet scored 138 goals in 245 league appearances for Juventus, making him the fourth-highest goalscorer in the club's history. Later in his career he had brief spells in Spain, the United Arab Emirates, Argentina and India.

At international level, Trezeguet scored 34 goals in 71 appearances for the France national team between 1998 and 2008. He also played for France at under-18, under-20, and under-21 levels. Trezeguet represented France at the 1997 FIFA World Youth Championship, the 1998 FIFA World Cup, UEFA Euro 2000 (scoring the golden goal in the final against Italy, which gave France a 2–1 win in extra time), the 2002 World Cup, Euro 2004 and the 2006 World Cup (where he missed his penalty in the shoot-out against Italy in the final). Trezeguet is part of the FIFA 100 list of 125 Greatest living players. In 2015, he was named one of the Golden Foot Award Legends.