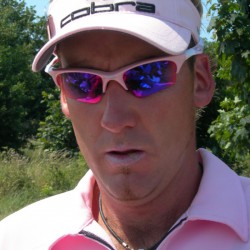 Ian James Poulter (born 10 January 1976) is an English professional golfer who is a member of the world's top two professional golf tours, the U.S.-based PGA Tour and the European Tour. He has previously been ranked as high as number 5 in the world rankings. The highlights of Poulter's career to date have been his two World Golf Championship wins at the 2010 WGC-Accenture Match Play Championship and the 2012 WGC-HSBC Champions. He is the touring professional for Woburn Golf and Country Club.

Early career
Born in Hitchin, and raised in Stevenage, Poulter took up the game at the age of four when his single-handicap father, Terry, gave him a cut-down 3-wood. His older brother Danny is also a professional golfer. Unable to get a place as a pro at a private club, he became the assistant pro and golf shop manager at the Chesfield Downs Golf Club. There he was forced by his boss to pay a full green fee every time he wanted to play in a competition. His handicap hence stayed at four, because he did not play in competitions. Following this period, Poulter joined as Assistant Pro at Leighton Buzzard golf course, giving lessons to youngsters at £1 per lesson.