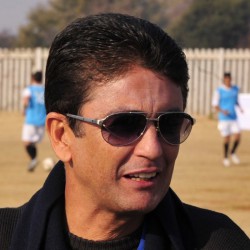 José Roberto Gama de Oliveira (born 16 February 1964), known as Bebeto, is a Brazilian former professional football player who played as a forward. He entered politics in the 2010 Brazilian General Elections and was elected to the Legislative Assembly of Rio de Janeiro representing the Democratic Labour Party.

With 39 goals in 75 appearances for Brazil, Bebeto is the sixth highest goalscorer for his national team. He was the top scorer for Brazil at the 1989 Copa América when they won the tournament. At the 1994 FIFA World Cup, he formed a formidable strike partnership with Romário to lead Brazil to a record fourth World Cup title. He also generated headlines at the tournament for his goal celebration where he began rocking an imaginary baby after scoring against the Netherlands; his wife had given birth to their third child just days before. He was also a member of the Brazilian team that won the 1997 FIFA Confederations Cup, while he won Olympic silver and bronze medals with Brazil at the 1988 and 1996 Summer Olympic Games respectively. In 1989, Bebeto was named South American Footballer of the Year.

In January 2013 and August 2014, Bebeto was named as one of the six Ambassadors of the 2014 FIFA World Cup and Rio 2016 in Brazil, others being Ronaldo, Amarildo, Marta, Carlos Alberto Torres, Mário Zagallo. His son, Mattheus, is a professional footballer.