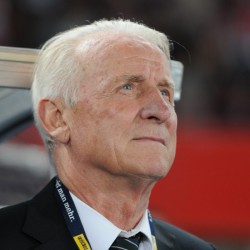 Giovanni Trapattoni (born 17 March 1939), sometimes popularly known as "Trap" or "Il Trap", is an Italian football manager and former footballer, considered the most successful club coach in the modern era of Serie A. A former defensive midfielder, as a player he spent almost his entire club career with A.C. Milan, where he won two Serie A league titles (1961–62 and 1967–68), and two European Cups, in 1962–63 and 1968–69. Internationally, he played for Italy, earning 17 caps and being part of the squad at the 1962 FIFA World Cup in Chile.

One of the most celebrated managers in football history, Trapattoni is one of only five coaches, alongside Carlo Ancelotti, Ernst Happel, José Mourinho and Tomislav Ivić to have won league titles in four different European countries; in total, Trapattoni has won 10 league titles in Italy, Germany, Portugal and Austria. Alongside Udo Lattek, he is the only coach to have won all three major European club competitions (European Cup, UEFA Cup, UEFA Cup Winners' Cup) and the only one to make it with the same club (Juventus). Also, he is the only one to have won all official continental club competitions and the world title, achieving this with Juventus during his first spell with the club. He is one of the rare few to have won the European Cup, the Cup Winners' Cup and Intercontinental Cup as both a player and manager.

Regarded as the most famous and consistent disciple of Nereo Rocco, Trapattoni coached his native Italian national team to the 2002 FIFA World Cup and UEFA Euro 2004, but could not replicate his club successes with Italy, suffering a controversial early exit in both competitions. Trapattoni was most recently the manager of the Republic of Ireland national team. He led them to their first European Championships in 24 years, enjoying a successful UEFA Euro 2012 qualifying campaign. This followed narrowly missing out on the 2010 FIFA World Cup, after his team were controversially knocked out by France.