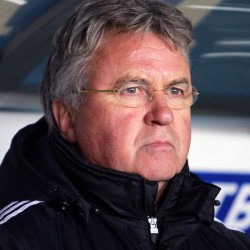 Guus Hiddink (born 8 November 1946) is a Dutch football manager and former professional player. Hiddink is currently the manager of the Curaçao national team. He enjoyed a long career playing as a midfielder in his native Netherlands, playing for sides such as PSV Eindhoven, De Graafschap and NEC Nijmegen, as well as some time spent playing in the United States. Since retiring from playing the game in 1982, Hiddink has gone on to enjoy an illustrious career in management, leading both clubs and countries from across the globe to achieve various titles and feats.

In March 1987, Hiddink was appointed PSV manager after previously serving as assistant. Hiddink's PSV side won three consecutive Eredivisie titles, three consecutive KNVB Cups and the European Cup in the historic Treble-winning season of 1987–88. Hiddink spent one unsuccessful season at Istanbul side Fenerbahçe, then the following season was appointed manager of Valencia, where he stayed until November 1993. He returned to the Mestalla in March 1994, where he stayed for the rest of the 1993–94 season.

Hiddink then took charge of the Dutch national team in January 1995, leading the Dutch to the quarter-finals of UEFA Euro 1996 and a fourth-place finish in the 1998 FIFA World Cup. He resigned as Netherlands manager after the World Cup, where he was then appointed manager of Spanish giants Real Madrid. His time in Madrid ended prematurely after he was sacked in February 1999 as Real were struggling in the league. He took over the reins at fellow La Liga side Real Betis in February 2000, but was sacked just three months later, following the season's conclusion.

The lure of taking another team to a World Cup led to Hiddink taking the South Korea national team job in January 2001. South Korea were joint hosts of the 2002 World Cup, so expectations were high. He led South Korea to a historic 4th-placed finish and became a national hero there. Hiddink returned to the Netherlands to rejoin PSV after the conclusion of the World Cup. During his second spell, he won three more Eredivise titles and another KNVB Cup, making him the most successful football manager in Dutch history. In July 2005, Hiddink was appointed manager of the Australian national team, serving as manager of both PSV and Australia simultaneously. He led Australia to qualify for their first World Cup in 32 years, while at the 2006 World Cup itself, he led the nation to the knockout stages, to date the only time in the Socceroos' history. Following the World Cup, he joined the Russian national team. Russia scraped through qualification at the expense of England, ultimately reaching the semi-finals of Euro 2008.

In February 2009, while still managing Russia, Hiddink was appointed interim manager of English club Chelsea. He enjoyed success during his short stay at Stamford Bridge, winning the FA Cup, whilst restoring Chelsea to a respectable position in the league. Meanwhile, after Russia failed to qualify for the 2010 World Cup, Hiddink resigned as its manager. He returned to Turkey as Turkish national team manager, but his time in charge ended two years later after the nation failed to qualify for Euro 2012. In February 2012, Hiddink made a return to club management, taking charge of Russian side Anzhi Makhachkala. After a period of relative success, Hiddink left Anzhi in July 2013.

Following the 2014 FIFA World Cup, Hiddink succeeded Louis van Gaal as Dutch national team manager, his second stint in charge of his home nation. His time at the helm ended, however, as the Netherlands were struggling to qualify for Euro 2016; he was subsequently relieved of his post and replaced by Danny Blind. Following this, nearly six years after his previous departure from Chelsea, Hiddink was again appointed interim manager of the London-based club in December 2015 following the sacking of José Mourinho.