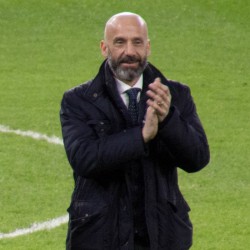 Gianluca Vialli (born 9 July 1964) is an Italian former football manager and player who played as a striker. Since retiring, he has gone into management, punditry and worked previously as a commentator for Sky Sport Italia.

He is currently part of the Italy national football team non-playing staff as a delegation chief.

Vialli started his club career at Cremonese in 1980 in his native Italy where he made 105 league appearances scoring 23 goals. His performances impressed Sampdoria who signed him in 1984. During which time he scored 85 league goals, won 3 Italian cups, the Serie A and the European Cup Winners Cup. Vialli transferred to Juventus for a World record £12.5 million in 1992. During this time he won the Italian Cup, the Serie A, Italian Supercup, UEFA Champions League and the UEFA Cup. In 1996 Vialli joined Chelsea and became Chelsea player manager the following season. In England he won the FA Cup, League Cup, UEFA Cup Winners Cup and UEFA Super Cup. He is one of nine footballers to have won the three main European club competitions, and the only forward to have done so; he is also the only player in European footballing history to have both winner's and runner's up medals in all three main European club competitions, including two winners medals for the UEFA Cup Winners' Cup.

At international level, Vialli represented Italy in two FIFA World Cups, in 1986 and 1990 on home soil. He also took part at UEFA Euro 1988, helping his nation to a semi-final finish, and was elected to the team of the tournament. During his twenty years long career as a professional footballer he scored 259 goals at club level, 16 goals with the national team, and 11 goals with the Italy national under-21 football team, for a total of 286 goals in more than 500 appearances, making him the tenth-highest scoring Italian player in all competitions.