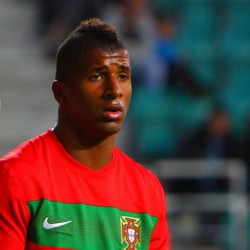 Carlos Miguel Ribeiro Dias (born 26 February 1993), known as Cafú, is a Portuguese professional footballer who plays for English club Nottingham Forest on loan from Olympiacos F.C. as a defensive midfielder.

Club career
Benfica
Born in Guimarães of Guinea-Bissauan descent, Cafú joined local Vitória SC's youth system at the age of 11, signing with S.L. Benfica four years later and going on to complete his formation there. He started playing as a striker, but later shifted to a defensive midfielder role.

On 19 September 2012, whilst with Benfica B, Cafú made his debut as a professional, coming on as a 46th-minute substitute for Cláudio Correa and scoring the 2–2 equaliser away against C.D. Tondela for the Segunda Liga. It was his only goal of the season, in seven starts.

Guimarães
On 26 July 2013, Cafú signed a four-year contract with former club Vitória. Having returned to his previous position, he was initially assigned to the reserve team, which he helped promote to the second level.

Cafú first appeared in the Primeira Liga on 17 August 2014, in a 3–1 away win over Gil Vicente F.C. where he partnered André André and Bernard Mensah in midfield and also featured the full 90 minutes. He finished his debut campaign with 29 games, in an eventual fifth-place finish and the subsequent qualification to the UEFA Europa League.

Lorient
On 8 June 2016, Cafú signed a four-year contract with French club FC Lorient. His maiden appearance in Ligue 1 occurred on 18 November, in a 0–3 home loss against AS Monaco FC.

Metz
Following his team's relegation, Cafú joined FC Metz also in the French top division on 1 August 2017, penning a three-year deal for an undisclosed fee. He made his league debut 17 days later, playing the full 90 minutes in a 0–1 home defeat to title holders Monaco.

Legia Warsaw
On 27 February 2018, Cafú was loaned to Legia Warsaw until 30 June 2019. Subsequently, the move was made permanent.

During his spell at the Polish Army Stadium, Cafú took part in 59 competitive matches (nine goals, six assists). On 2 May 2018, he scored the 2–1 winner in the final of the Polish Cup against Arka Gdynia.

Olympiacos
On 1 February 2020, Olympiacos F.C. agreed to pay Legia €400,000 to sign Cafú. On 5 October, he was loaned to English Championship side Nottingham Forest until the end of the season.

International career
Cafú earned 27 caps for Portugal, from the under-16 to the under-20 levels. He was part of the under-19 squad that competed in the 2012 UEFA European Championship.