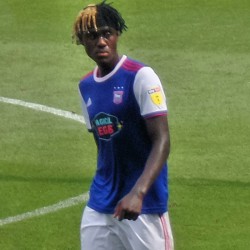 Trevoh Tom Chalobah (born 5 July 1999) is an English professional footballer who plays as a midfielder or defender for Ligue 1 club Lorient, on loan from Chelsea.

He was named by Antonio Conte as a substitute for the 2018 FA Cup Final victory against Manchester United on 19 May 2018 at Wembley Stadium despite never having previously played a professional game. Chelsea won the match 1–0, and Chalobah did not enter the field.

Ipswich Town (loan)
He signed for EFL Championship club Ipswich Town on a season-long loan deal in June 2018, and made his professional debut on 4 August, starting in a 2–2 draw with Blackburn Rovers. Two weeks later he scored his first goal, equalising in a 1–1 draw with Aston Villa at Portman Road. He played 44 matches for the Tractor Boys, who were relegated to EFL League One.

Huddersfield Town (loan)
On 8 August 2019, Chalobah signed a new contract with Chelsea through the 2022 season, and began a season-long loan to Huddersfield Town. He made his debut five days later in a 1–0 home loss to Lincoln City in the first round of the EFL Cup, playing the full 90 minutes. He scored his first goal for Huddersfield to equalise in a 2–1 defeat at Cardiff City on 21 August.

Lorient (loan)
On 18 August 2020, Chalobah signed a new contract and joined French side Lorient on loan for the 2020–21 season. He made a league debut as a substitute on 13 September, in a 3–2 loss against RC Lens.

International career
He has represented England at youth level from Under-16 up to Under-20, captaining all four teams at various stages. In November 2014, Chalobah captained the England under-16 team against Scotland in the Victory Shield. In May 2016, Chalobah was captain of the England under-17 team that lost to Spain in the quarter-final of the 2016 UEFA European Under-17 Championship.

Chalobah was included in the England under-19 squad for the 2017 UEFA European Under-19 Championship. An ankle injury sustained in the final group game against Germany ruled him out for the rest of the tournament. England went on to defeat Portugal in the final.

Personal life
His brother Nathaniel Chalobah is also a professional footballer; he has played for Chelsea, Napoli, and is now at Watford.