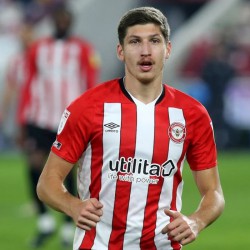 Vitaly Janelt (born 10 May 1998) is a German professional footballer who plays as a defensive midfielder for English club Brentford. He is a product of the Hamburger SV and RB Leipzig academies and made his professional breakthrough at VfL Bochum. Janelt is a German U21 international.

Club career
RB Leipzig
After beginning his career with spells in the youth systems at Bargfelder SV, SSC Hagen Ahrensburg and Hamburger SV, Janelt joined the academy at RB Leipzig in 2014, for a fee reported to be €150,000. He signed a five-year professional contract in July 2016 and progressed to the reserve team, for which he made six Regionalliga Nordost appearances during the 2016–17 season. Prior to Janelt's departure from the Red Bull Arena at the end of the 2017–18 season, disciplinary issues led to him spending 18 months away on loan.

VfL Bochum (loan and permanent transfer)
On 9 January 2017, Janelt joined 2. Bundesliga club VfL Bochum on loan until 30 June 2018, with an option to buy. He made 20 appearances during an injury-affected spell and signed a three-year contract with the club on 30 May 2018, for an undisclosed fee. After making 10 appearances during the 2018–19 season, Janelt broke into the first team in 2019–20, with 24 appearances during a season which was ended prematurely by the COVID-19 pandemic. Janelt departed VfL Bochum in October 2020 and made 54 appearances during his ​3 1⁄2 years at the Ruhrstadion.

Brentford
On 3 October 2020, Janelt moved to England to sign a four-year contract with Championship club Brentford for an undisclosed fee. He scored his first goal for Brentford in a 2–1 win over Queens Park Rangers on 27 November 2020.

International career
Janelt was capped by Germany at U15, U17, U19, U20 level and is a current U21 international. He was a part of the Germany squads at the 2015 UEFA European U17 Championship and the 2015 U17 World Cup.