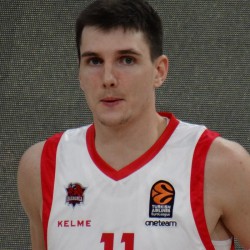 Matthew Lawrence Janning (born June 22, 1988) is an American-born naturalized Georgian professional basketball player for Baxi Manresa of the Liga ACB. He is a 6 ft 5 in (1.96 m) tall shooting guard that played college basketball for Northeastern University.

On July 16, he signed a 1-year contract for $120,000 with Novipiù Casale Monferrato of the Lega Basket Serie A. In his first Italian League season, he averaged 12.6 points, 3.6 rebounds, and 1.7 assists per game, while shooting 41% from 2-point range, 38% from 3-point range, and 70% from the free throw stripe. Janning then played with the Indiana Pacers in the Orlando Summer League, and later for the Memphis Grizzlies, in the Las Vegas Summer League, during the 2012 summer.

Janning then signed with the reigning Italian League champions, Montepaschi Siena, in August 2012. He made the Lega Basket Serie A BEKO All-Star team. In his 2nd Italian League season he is averaging 7.1 points, 2.3 rebounds, and 1.0 assists per game, while shooting 48% from 2-point range, 31% from 3-point range, and 87% from the free throw stripe.

On August 4, 2013 it was announced that Janning signed for Croatian champions Cibona Zagreb. He was released in December 2013, due to financial problems of the club. On January 3, 2014, he signed with his former club Montepaschi Siena for the rest of the season.

On September 28, 2015, Janning signed with the Denver Nuggets. However, he was later waived by the Nuggets on October 15 in order for him to sign with Hapoel Jerusalem of the Israeli Basketball Premier League. On February 7, 2016, he parted ways with Hapoel Jerusalem. Two days later, he signed a deal with Lokomotiv Kuban until the end of the 2016–17 season.

On September 15, 2017, Janning signed a two-month deal with Baskonia of the Liga ACB and the EuroLeague to replace the injured Jordan McRae. He finally extended his contract for the whole season on November 17.

On July 6, 2018, Janning re-signed a one-year deal with Baskonia of the Liga ACB and the EuroLeague. On July 7, 2020, Janning was officially released from the Spanish club.

On September 13, 2018, he made his first appearance for the Georgian team in an 85–80 win over Israel, recording 15 points, three rebounds and three assists.