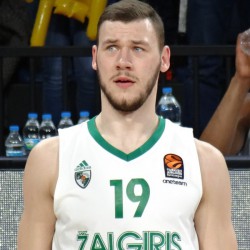 Martynas Sajus (born 22 February 1996) is a Lithuanian basketball player for Baxi Manresa of the Liga ACB.

Professional career
On 9 July 2014, Sajus signed a 3+2 contract with Žalgiris Kaunas and started to play for Zalgiris development team in the NKL. In first season, he averaged 5.4 points per game and 3.9 rebounds per game. In December 2015, because of injuries in the Žalgiris main team, he was registered for a LKL match against BC Dzūkija and made a debut by scoring 2 points. On 29 December 2015, he made his EuroLeague debut against Laboral Kutxa playing only 4 seconds.

On August 11, 2016, Sajus was loaned to Polpharma Starogard Gdański for the 2016–17 season. After a successful season in Poland, he was brought back by Žalgiris on August 12, 2017. On July 3, 2018, Sajus parted ways with the team and signed with Wilki Morskie Szczecin of the PLK.

National team career
Sajus won gold medal with the Lithuanian team during the 2017 Summer Universiade after defeating the United States' team 74–85 in the final.