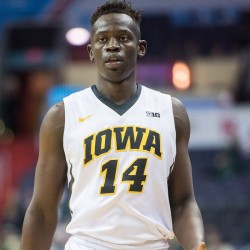 Kacoul Dut "Peter" Jok (born March 30, 1994) is a Sudanese basketball player for UCAM Murcia of the Spanish Liga ACB. He played college basketball for the University of Iowa of the Big Ten Conference. A 6 ft 6 in (1.98 m) shooting guard, Jok is from Khartoum.

Early life
Jok was born and spent his childhood living in Khartoum, Sudan. When Peter was three years old, his father died as a general for the Sudan People's Liberation Army during the Second Sudanese Civil War. Peter's grandfather, the chief of their village, was also killed during the war. Growing up, Peter was solely exposed to soccer, and had no experience with basketball. The family eventually fled to Uganda and then Kenya to escape the war. They joined many other Sudanese refugees in Des Moines, Iowa, which was where they moved to in December 2003. Jok arrived in the United States without knowing any English.

In fourth grade, Jok was asked by his friends to play basketball for the Greenwood Elementary School team, and he became the tallest player on the team. He drew the attention of Mike Nixon, who wanted to create a fourth-grade Amateur Athletic Union (AAU) team at the time. He watched Jok play at a recreational game in Des Moines, and even though he did not touch the ball during the entire game, Jok was asked to join Nixon's team. Jok was reluctant to play basketball at this point in his life, but he made the all-tournament team at the fourth grade AAU state championship. In seventh grade, he won the Spiece tournament title at Fort Wayne, Indiana. He received offers from colleges as early as eighth grade.

High school career
Jok attended Theodore Roosevelt High School in Des Moines for his first two seasons of high school basketball. As a freshman, he was ranked by Scout.com as one of the top 10 recruits in the United States. In 2010, he was invited to the Nike Top 100 camp in St. Louis, making him one of 30 freshmen to attend the event. At the camp, he injured his knee, and thinking that it was tendinitis, he continued to play as a sophomore. However, he later learned that he was suffering from a torn patellar tendon, and he underwent surgery in June 2011. In his sophomore year, Jok averaged 18.5 points and seven rebounds, earning second team all-state and all-conference honors. Following his second season, he transferred to Valley High School in West Des Moines, Iowa, where he was coached by Jeff Horner, who was the all-time assists leader at University of Iowa. Initially, he found it difficult to get back in rhythm. After recovering as a junior, Jok averaged 10.2 points and 4.3 rebounds, shooting 37 percent on three-pointers. In the following season, he was named first-team all-state and first-team Parade All-American, averaging 23.6 points, which made him the top scorer in the Iowa Class 4A.

College career
During his freshman year at the University of Iowa (2013–14) Jok played 9.4 MPG for the Hawkeyes, averaging 4.4 PPG and 34.8% on 3P%, the eighth-best mark for a freshman. He also tied a freshman record by scoring 10 or more points and shooting 80 percent or more in a first-round NCAA Tournament game against the University of Tennessee. As a sophomore, he played in all 34 games and averaged 7.0 PPG and 34.3% on 3-pointers. Jok showed massive improvement his junior season, scoring 16.1 PPG in 27.7 MPG, while also shooting 40.2% on 3P% (80/199). He was named second team all-conference in the Big Ten.

Jok finished his Iowa career with over 1500 points and 400 rebounds.

Professional career
Northern Arizona Suns (2017–2019)
After being undrafted for the 2017 NBA draft, Jok played for the New Orleans Pelicans in Las Vegas during the 2017 NBA Summer League. He recorded around nine points per game in three games with the Pelicans. On September 22, 2017, Jok signed a partially guaranteed deal with the Phoenix Suns. He was waived by Phoenix before playing a single game with them on October 11, 2017. He was called up by the Northern Arizona Suns as an affiliate player on October 24, 2017. Jok made his professional debut on November 4, 2017, playing in only 8 minutes of action and recording a single rebound in a 126–118 loss to the Agua Caliente Clippers. Jok averaged 4.9 points, 2.2 rebounds, and 0.7 assists per game with Northern Arizona.

Personal life
Jok's mother, Amelia Ring Bol, is a member of the South Sudan parliament. She visits Peter and the rest of her family in Des Moines occasionally. His legal guardian in Iowa is Mike Nixon. He has an older brother, Dau, and a younger brother, Jo Jo. Jo Jo played football as a defensive lineman at Dowling Catholic High School and Iowa Western Community College. Jok's uncle was the late former NBA center Manute Bol, cousin to Manute's son Bol Bol, and Luol Deng, who is currently playing professional basketball for the Minnesota Timberwolves, is one of his mother's cousins.

On April 26, 2014, Jok was arrested at 2:43 am for driving under the influence after turning on an improper lane without a safety flag. In addition, one of his moped's rear taillights was missing its cover. After Jok denied the accusations, he found to have watery eyes and an alcoholic smell, with a blood alcohol content of .082. He was taken into custody and remained at the Johnson County Jail until the middle of the day. His license was revoked. Jok pleaded guilty on May 2 and participated in a weekend drunk-driving program. On July 15, 2014, Jok was arrested a second time for driving with a revoked license. University of Iowa athletics director Gary Barta said, "I'm very disappointed to learn about this, especially in light of the fact that Peter had a previous incident earlier this summer". Jok was incarcerated for four days at the Johnson County Jail, but his status with the team was unaffected.