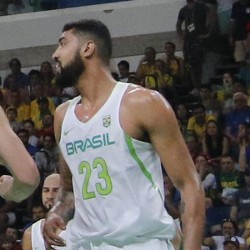 Augusto César Lima Brito (born September 17, 1991) is a Brazilian professional basketball player for UCAM Murcia of the Liga ACB. He is 6'10" (2.08m) tall and he can play as either a power forward or a center. He is left handed, but at the age of ten, his parents forced him to learn to write and shoot with the right. He was born in Rio de Janeiro.

Professional career
Lima went to Unicaja at 16, to play with the junior teams of the organization. He also combined his playing time with Málaga's farm team, Clínicas Rincón, of the Liga EBA.

In the next season of 2010–11, his playing time in the Spanish League was limited to 7 games, with an average playing time of 4.6 minutes per game, with his numbers dropping down to 1.7 points, 0.9 rebounds, and 0.3 blocks per game.

Nevertheless, that same season, the Brazilian player had his first good performance in a EuroLeague game, in which he also produced his best performance of the season, in a game against Brose Baskets, the leader of the German League, in which Lima scored 14 points and grabbed 8 rebounds. He averaged 2.9 points and 3.1 rebounds per game during the Euroleague 2010–11 season.

In 2011, he was transferred to CB Granada, to fill the empty roster space following the departure of Robert Kurz, in the inside game of CB Granada, sharing minutes with Paulão Prestes.

In the 2011–12 season, he returned to Clínicas Rincón, a subsidiary of Unicaja, while also playing in 17 games in the Spanish League with the senior men's first team, but with little continuity, due to not having a European passport. On January 26, 2012, Lima acquired Spanish citizenship.

On 25 January 2016, Lima agreed a contract until the 2017–18 season with Real Madrid. On July 29, 2016, Real Madrid loaned him to Žalgiris for the 2016–17 season. He helped Žalgiris win the national championship and the cup tournament, and to a successful season in the Euroleague, where they narrowly missed the playoffs. On August 5, 2017, Real Madrid loaned him to Beşiktaş for the 2017–18 season. On December 31, 2017, he left Beşiktaş. On 2 January 2018, Lima signed with the Xinjiang Flying Tigers of the Chinese Basketball Association. After his contract with the Tigers expired, Lima signed with his former team UCAM Murcia. Lima started the 2018-2019 season with Croatian side KK Cedevita, but left the team after changes in the coaching staff. He signed with San Pablo Burgos in December.

National team career
Lima was a member of the senior men's Brazilian national basketball team that won the silver medal at the 2011 FIBA Americas Championship in Mar del Plata, Argentina, which qualified Brazil for the 2012 Summer Olympics in London, Great-Britain.

In 2013, Lima was summoned again to the Brazilian senior men's team, led by head coach Rubén Magnano, for the initial training phase before the 2013 FIBA Americas Championship, but due to a herniated disc, he had to be cut from the training of the team.