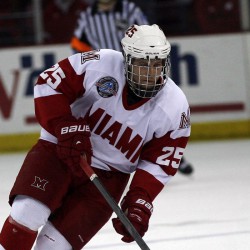 Blake Coleman (born November 28, 1991) is an American ice hockey player for the Tampa Bay Lightning of the National Hockey League (NHL). He was selected in the third round, 75th overall, by the New Jersey Devils during the 2011 NHL Entry Draft. Coleman won back-to-back Stanley Cups with the Lightning in 2020 and 2021, becoming just the second Texas-born player to win the Stanley Cup (after Brian Leetch won with the New York Rangers in 1994) and first to be exclusively trained in the state.

Coleman played at the collegiate level for the Miami RedHawks. After completing his college career and graduating from Miami University, Coleman signed a two-year entry-level contract with the New Jersey Devils. He was assigned to the Devils' AHL affiliate, the Albany Devils to begin his professional career in the 2015–16 season.

On February 16, 2020, Coleman was traded to the Tampa Bay Lightning in exchange for Nolan Foote and a conditional first-round pick.