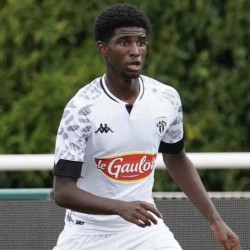 Mohamed-Ali Cho (born 19 January 2004) is a professional footballer who plays as a forward for Ligue 1 club Angers SCO. Born in France, he has represented England internationally.

Club career
A youth product of West Ham, Paris Saint-Germain and Everton, Cho signed his first professional contract with Angers on 2 May 2020. In doing so, he became the youngest player ever to sign a professional contract in France. Angers planned to initially use him in the reserve teams, but he quickly became part of the first team. He made his professional debut with Angers in a 2–0 Ligue 1 loss to Bordeaux on 30 August 2020. He was one of the 10 youngest players to play in the top European leagues during the season. He started his first match for Angers in the cup on 11 February 2021, in a 2–1 win against Rennes. He made his first league start on 17th April 2021 against Rennes.

International career
Cho was born in France to an Ivorian father and a Moroccan mother, and moved to England at one week old, where his family worked in London. He spent his childhood moving between England and France several times. After originally playing in the West Ham academy as a youngster, Cho briefly returned to France at age 6 to play in Chantilly's and then PSG's academy, before returning to England at age 11.