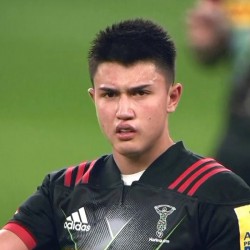 Background
Born in the Philippines to a British father and a Filipina mother, Smith picked up the game of rugby union at the age of seven with Centaurs RFC when his family moved to Singapore. Later, Smith received a sports scholarship to attend Brighton College and went on to captain the school's 1st XV. The young fly-half was named Player of the Tournament at the 2016 St Joseph's Rugby Festival.

Smith is the second youngest debutant featured in the Aviva Premiership at 18 years and 200 days old whose record is behind George Ford when Ford made his league debut for Leicester Tigers in 2010.

Club career
Smith contributed ten points from the tee in Harlequins U18s Academy Final win over Sale Sharks U18s and he played in five of the fixtures during the 2016–2017 season and scored two tries along the way, one against London Irish and once against Saracens.

The young fly-half previously played for Harlequins at the 2016 Singha Premiership Rugby Sevens.

In March 2017, Smith was promoted from Harlequins Elite Player Development Group (EPDG) up to the full-time Academy starting in June.

Having just joined the academy side, Smith was named in the 12-man senior squad alongside with another Brighton College graduate Calum Waters for the 2017 Singha Premiership Rugby Sevens at Franklin's Gardens. Smith had a stand-out evening on the first day of the tournament by scoring two tries against London Irish and eventually assisted Harlequins to reach the club Semi-final before losing out to Newcastle Falcons.

On 2 September 2017, Smith made his professional debut wearing the number 10 jersey for the senior Harlequins side in the Aviva Premiership London Double Header fixture against London Irish at Twickenham Stadium. Two weeks later, Smith made a man-of-the-match performance against Wasps and subsequently ended the home side's 22-match winning streak at Ricoh Arena.

International career
Smith made his first appearance for England with a try in the U16s match victory against Wales in April 2015. He later represented England at U18s and at the 2017 Six Nations Under 20s Championship.

In May 2017, Smith took part in one of the training sessions with the England elite senior squad during their 3-day camp held at Brighton College in preparation for the Old Mutual Wealth Cup match against the Barbarians and the summer tour to Argentina.

On 12 July 2017, Smith was named in the England U18s squad for a three-match tour of South Africa in August.

On 3 August 2017, Smith was named in Eddie Jones' pre-season senior England training squad. The Harlequin has "been called up having been involved in some sessions at England's training camp in Brighton at the end of last season, as well as playing in England U20s 2017 Six Nations Grand Slam winning squad.". Eddie Jones described Smith's inclusion in the senior England squad as part of the plan to develop young players as well as to give pressure on experienced players such as Owen Farrell and George Ford.

On 22 September 2017, Smith was named in the 33-man England training squad for a camp in Oxford ahead of the Autumn internationals, although England coach Eddie Jones said he would be 'treated like an apprentice'. In the following month on 26 October, Smith was called into the England squad for the Autumn international series after an impressive start in the premiership season.

Smith was part of the senior England training squad during the 2018 Six Nations Championship. After a break-through 2017-2018 season, he was named in the England U20 squad in the 2018 World Rugby Under 20 Championship in France. The fly-half came off the bench in the opening match against Argentina and scored his first try in his U20 jersey. Later he started at No. 10 in the pool match against Italy, semi-final against South Africa and in the final against France.

On 2 June 2019 Smith made his England XV debut against the Barbarians. During the game, Smith contributed 26 points which included his first try for the full team. The final score was 51-43 to England. Smith was awarded Man of the Match for his outstanding performance.