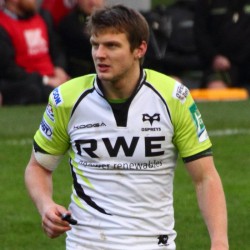 Daniel Biggar (born 16 October 1989) is a Welsh international rugby union outside-half who plays club rugby for the Northampton Saints. He became the youngest player to reach 100 games for his former club, the Ospreys. On 7 December 2015, Biggar won the BBC Cymru Sports Personality of the Year Award.

Biggar was born in Morriston, Swansea. He was a Wales age grades international, including Under-20. He was selected for the Wales national rugby union team squad for the 2008 Autumn Internationals series, making his debut at the age of 19 against Canada on 18 November.

After 18 months in the wilderness, including missing the 2011 Rugby World Cup, Biggar was recalled for the 2012 Welsh squad after a run of good form with the Ospreys. This form was topped off by the match-winning conversion from the touchline in the 2012 Pro12 Grand Final, as well as a number of man-of-the-match performances in the run-in at the end of the season. Biggar finally got his chance in the Welsh number 10 shirt in the victorious 2013 Six Nations Championship campaign, starting all five games at fly half, thanks to a Rhys Priestland injury. Biggar capped off the tournament with a drop goal, conversion and penalty in the Championship decider against England.

Biggar continued his good run of form into the 2013–14 season, his performances for the Ospreys earning him a call-up for the 2013 Autumn Internationals, in which he started against Australia and Argentina, scoring a try against the former. He played three games during the 2014 Six Nations, coming on as a substitute for Rhys Priestland against France and England and starting against Scotland. In June 2014 Biggar started two tests against South Africa, including in the narrow 31–30-second test defeat, despite being yellow-carded. Biggar cemented his place as the Wales starting fly-half during the 2014 Autumn Internationals, starting three out of the four tests. He received many plaudits for his world-class performances, as well as receiving the man-of-the-match award against South Africa in a 12–6 victory.

Biggar starred in all of Wales' 2015 Six Nations Championship matches, and scored his first Welsh try vs France.

In the 2015 Rugby World Cup, Biggar took over the kicking duties after Halfpenny was ruled out of the whole tournament. Biggar kicked 56 points during the tournament including 23 points in Wales' 28–25 win over England, and claimed the Man of the Match accolade. In the quarter-final, he converted Gareth Davies' try against South Africa. Despite this, Wales would go on to lose 23–19.

Biggar has his own routine before kicking goals, which fans now call "The Biggarena" after Los Del Rio's 1995 hit, Macarena.

In September 2017, English Premiership side Northampton Saints announced that they had signed Biggar for the 2018–19 season. The length of Biggar's contract with Saints is currently undisclosed.