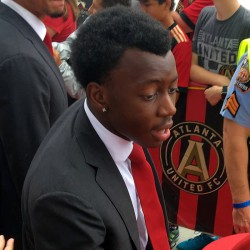 Early years
Born in Abuja, Nigeria, Bello moved with his family to Douglasville, Georgia when he was one year old. During his early career, Bello played for Southern Soccer Academy, a youth soccer club affiliated with English club Chelsea, and the Alpharetta Ambush, where he played for five years. While playing at Alpharetta Ambush, Bello would play with future Atlanta United academy teammate Zyen Jones.

After spending five years with the Alpharetta Ambush, Bello moved to the academy side at Atlanta United FC, a new expansion club for Major League Soccer. His former coach, Tony Annan, now at Atlanta United as their academy director, was the one to reach out to Bello to join his side.