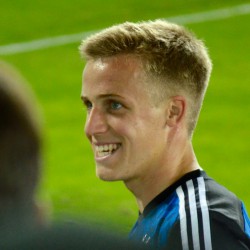 Career
Thompson played one year of college soccer at Indiana University where he scored five goals and one assist in 12 matches and was named Big Ten Freshman of the Year in 2013, before signing a Homegrown Player contract with San Jose Earthquakes on March 14, 2014.

Thompson made his professional debut on June 7, 2014 as an 89th-minute substitute in a 0–1 loss to Toronto FC.

Thompson recorded his first MLS assist in a 1–1 draw against Orlando City SC on May 17, 2017, coming off the bench in the 82nd minute to assist Chris Wondolowski's game-tying goal in the 83rd minute.

He scored his first MLS goal on July 4, 2017, in the 2nd minute of a 4–2 loss to Atlanta United FC at Bobby Dodd Stadium. Thompson's first goal came after making 64 MLS appearances over four years and logging 2,633 league minutes. On August 7, he was named to the MLS Team of the Week after recording his third assist of the season in the Earthquakes' 2–1 victory over Columbus Crew SC on August 5. He was announced as a nominee for the MLS Humanitarian of the Year Award on October 14, 2017. On October 22 he received San Jose's club award for Humanitarian of the Year after leading a number of youth clinics in the area and for actively aiding relief efforts in the wake of the 2017 California floods.