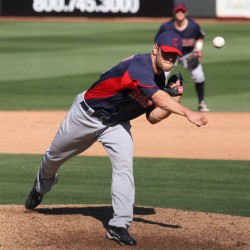 Frank Joseph Herrmann (born May 30, 1984), is an American professional baseball pitcher for the Chiba Lotte Marines of the Nippon Professional Baseball (NPB). He previously played for the Cleveland Indians and Philadelphia Phillies of Major League Baseball (MLB) and the Tohoku Rakuten Golden Eagles of NPB.

Amateur career
High school
Herrmann attended Montclair Kimberley Academy, where he played baseball, football, and basketball. He was one of the school's few thousand point scorers in basketball. In 2011, he was inducted into the MKA Athletic Hall of Fame.

College
For parts of the Spring and Fall 2006 semesters, Herrmann authored a column for The Harvard Crimson. He penned nine stories. The column functioned as a diary of his first year as a professional athlete. Though the editor's note before each article describes him as a "former Harvard" pitcher, the stories were written and published before he graduated from Harvard.

Herrmann received his degree in economics from Harvard University in the fall of 2006. He is the fifteenth player to play in the majors after going to Harvard. Jeff Musselman had been the last. As a junior, he pitched a two-hitter against Yale and a one-hitter against Cornell. At the time of his signing with Cleveland, he was not finished with his studies at Harvard, so the Indians allowed him to return to complete his requirements and finish his degree.

With the Aeros in 2008, Herrmann made 23 starts and, with his 11–6 regular season record and helped lead the team to the 2008 Eastern League championship series.

Hermann made his major league debut with the Cleveland Indians June 4, 2010. In a game against the Chicago White Sox, he pitched 1.1 innings and gave up no hits, runs, or walks. He was credited with his first career hold, retiring all four batters he faced: Gordon Beckham, Juan Pierre, Omar Vizquel, and Alex Ríos. He struck out Vizquel for the first strikeout of his major league career.

On December 2, 2013, Herrmann signed a one-year deal with the Indians, avoiding arbitration. He was designated for assignment on March 30, 2014. He elected free agency on November 6, 2015.