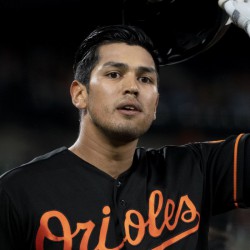 Career
Ruiz attended Bishop Amat Memorial High School in La Puente, California. He played both baseball and football. Ruiz verbally committed to attend the University of Southern California (USC) as a 14-year-old freshman to play college baseball for the USC Trojans baseball team. As a junior, he was named The San Gabriel Valley Tribune's Baseball Player of the Year. Considered a potential first round pick in the 2012 Major League Baseball Draft entering his senior season, he missed most of the year due to a blood clot in his right clavicle.

Houston Astros
Ruiz was drafted by the Houston Astros in the fourth round of the 2012 Major League Baseball draft. He signed with the Astros for $1.85 million over playing college baseball at USC. He made his professional debut that season for the Gulf Coast Astros and also played for the Greeneville Astros of the Rookie-level Appalachian League. He finished his first season hitting .252/.336/.400 and one home run in 38 games.

In 2013, Ruiz played for the Quad Cities River Bandits of the Class A Midwest League. He played in 114 games and hit .260/.335/.430 with 12 home runs. Ruiz spent the 2014 season with the Lancaster JetHawks of the Class A-Advanced California League. After the regular season, the Astros assigned Ruiz to the Salt River Rafters of the Arizona Fall League.

Atlanta Braves
The Astros traded Ruiz, Andrew Thurman, and Mike Foltynewicz to the Atlanta Braves in exchange for Evan Gattis and James Hoyt on January 14, 2015. He was assigned to the Mississippi Braves of the Class AA Southern League, where he struggled. Despite inconsistent results in Ruiz's first year with the Braves organization, he was invited to spring training in 2016 and began the season with the Gwinnett Braves of the Class AAA International League. He hit for a .271 batting average and a .755 on-base plus slugging percentage at the Triple A level, to go along with ten home runs and 62 runs batted in.

The Braves promoted Ruiz to the major leagues on September 17, 2016. The next day, he was announced as a pinch hitter in the seventh inning of a game against the Washington Nationals, but was unable to make a plate appearance before the contest was called due to rain. Ruiz tripled for his first major league hit on September 28, against Philadelphia Phillies pitcher Frank Herrmann.

Before reporting to spring training in 2017, Ruiz sought help from Azusa Pacific University track coach Kevin Reid, who aided Ruiz in improving his agility and conditioning. Ruiz began the 2017 season with Gwinnett and was promoted to the major leagues on May 18. On May 20, 2017, Ruiz hit his first major league home run off Washington Nationals pitcher Max Scherzer. Ruiz started the 2018 season at Gwinnett.