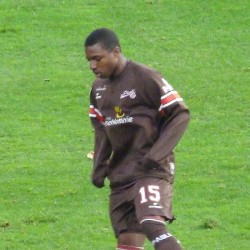 Joseph-Claude Agyeman Gyau (born September 16, 1992) is an American soccer player who plays as a winger for FC Cincinnati.

Early life
Born in Tampa, Florida, he grew up in Silver Spring, Maryland, where he played youth soccer for the nearby Bethesda Roadrunners before joining the IMG Soccer Academy in 2009. Gyau is of third-generation pedigree of professional footballers, being the son of former U.S. international Phillip Gyau and the grandson of Joseph "Nana" Gyau, a former Ghanaian international.

Club career
In August 2012, Gyau was loaned to 2. Bundesliga side FC St. Pauli from TSG 1899 Hoffenheim for the entire season, with an option for another season. He made his first team debut for Hoffenheim in April 2014, coming on in the final 21 minutes of a 0–0 draw against Eintracht Frankfurt. In June 2014, Gyau joined the Under-23 squad of Borussia Dortmund. On September 24, 2014, he made his first team debut for Borussia Dortmund against VfB Stuttgart, coming on in the 74th minute of the match which ended in a 2–2 draw. After being out with injuries for nearly two years, he made his return with Borussia Dortmund II as a substitute on October 29, 2016.

In January 2017, Gyau moved to 3. Liga side SG Sonnenhof Großaspach on an 18-month deal.

On August 8, 2019, it was announced that Gyau had signed for MLS side FC Cincinnati.

International career
Gyau has been capped for the United States at the U-15, U-17, U-20, and U-23 levels. In March 2012, Gyau was called into the US U-23 team for Olympic qualifying matches. The team did not qualify for that year's Summer Olympics.

In November 2012, Gyau was called up to the United States national team. His first start for the US was on September 3, 2014 against the Czech Republic in a friendly match. Gyau made his second start for the national team on October 10, 2014 in a friendly match against Ecuador. After playing less than 15 minutes, he came off the pitch with a suspected sprained left knee and was replaced by Bobby Wood. On October 12, it was announced that Gyau had torn his lateral meniscus and suffered a bone bruise.

In June 2019, Gyau made his first United States national team appearance since 2014.