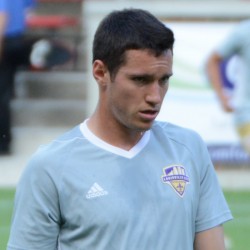 Kyle Smith (born January 9, 1992) is an American soccer player who plays for Orlando City in MLS.

College and youth
Smith played four years of college soccer at Transylvania University between 2010 and 2013, scoring a total of 47 goals during his four years. As a Junior he set a Transylvania single season record with for both goals and points with 18 and 40 respectively. As a Senior Smith scored 18 goals with 8 assists earning Heartland Collegiate Athletic Conference Offensive MVP during his final seasons. He left Transylvania as the team's all-time leading in goals, assists, and points.

After graduation Smith played two seasons with Premier Development League expansion side Cincinnati Dutch Lions in both 2014 and 2015. In 2015 he was second in the PDL with eleven goals scored over 14 matches. He left the Dutch Lions as their all time leader in goals, assists, and points with twelve, eight and thirty-two respectively, as well having set their season records in those categories in 2015.