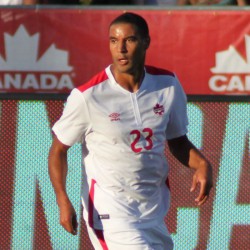 Tesho Akindele (born March 31, 1992) is a Canadian professional soccer player who plays as a forward for Orlando City in Major League Soccer (MLS).

Club career
Early career
Tesho Akindele was born in Canada to a Nigerian father and a Canadian mother and moved with his family to the US at the age of eight. He grew up in Thornton, Colorado, and was a standout for Northglenn High School, turning down an offer to join the Colorado Rapids academy at the age of 17 to focus on academics.

Akindele played four years of college soccer at the Colorado School of Mines, where he became the school's all-time goals leader with 76 goals scored and was a four-time All-American. He ranked second in the nation in goals scored in 2012 with 22 and was named a First Team NSCAA All-American and the 2012 RMAC Offensive Player of the Year for his efforts. Also an NSCAA First Team All-American and the RMAC Freshman of the Year in 2010, Akindele was the first player in the history of his school's conference to score three consecutive hat tricks.

FC Dallas
On January 16, 2014, Akindele was drafted in the first round (sixth overall) of the 2014 MLS SuperDraft by FC Dallas, becoming the highest-highest-drafted NCAA Division II player in MLS history. Akindele made his professional debut in a 2–3 loss against Seattle Sounders FC on April 12, 2014. After scoring seven goals in 26 appearances, Akindele was named MLS Rookie of the Year.

Orlando City
On December 9, 2018, Dallas traded Akindele to Orlando City in exchange for $100,000 of Targeted Allocation Money in 2019 and $50,000 of General Allocation Money in 2020. He scored on his debut, a 2–2 draw in Orlando's season opener against New York City FC. Akindele had his option for the 2020 season exercised by Orlando, keeping him with the club for 2020. On May 1, 2021, Akindele broke the record for the fastest goal scored in Orlando City history when he intercepted a backpass from Nick Hagglund to score the opener of a 3–0 win over FC Cincinnati in 31 seconds, breaking the previous record of 63 seconds set by Chris Mueller in 2018.

International career
Akindele attended a youth training camp of the Canadian youth national team in 2009 and played for Canada's U-17 national team in a friendly against Costa Rica on April 2, 2009. On November 5, 2014, it was reported that Akindele had turned down a call-up from Canada with a view to represent the United States instead, and on January 9, 2015, he was called up to the United States senior team camp ahead of friendly matches versus Chile and Panama. He did not play in either friendly due to not having an American passport at the time of the friendlies.

However, on April 14, 2015, Canada coach Benito Floro told media that Akindele was "99.9 percent" going to represent Canada instead of the United States, and on June 2, Akindele accepted a call-up to the Canadian national team for two 2018 FIFA World Cup qualifying matches against Dominica. He made his debut for Canada against Dominica on June 11. He scored his first goal for Canada on June 16 in the return leg against Dominica at BMO Field in a 4–0 victory. Akindele scored his second Canada goal in a 1–1 friendly draw in June 2016 with Azerbaijan.