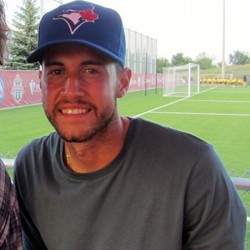 Jonathan Osorio (born June 12, 1992) is a Canadian professional soccer player who plays as a midfielder for Major League Soccer club Toronto FC and the Canadian national team. He holds the Toronto FC club record for most appearances.

Youth soccer
Osorio began playing soccer with the Brampton Youth Soccer at age 10. When he was 15, he moved to Clarkson Sheridan SC and graduated from St. Edmund Campion Secondary School. In 2010, he went to Uruguay to play with Nacional's academy, where he played with his future teammate on the Canadian national team Lucas Cavallini.

Club career
SC Toronto
Osorio began his career with SC Toronto in the Canadian Soccer League in 2012, where he had a successful season finishing as the club's second highest goalscorer, and helped Toronto finish third in the overall standings, which secured a postseason berth for the club. He featured in the playoff quarterfinal match against the Serbian White Eagles, but were eliminated from playoff contention after losing the match by a score of 1–0. For his successful debut season he was awarded the CSL Rookie of the Year.

Toronto FC
Osorio has been with TFC first team since 2013. He began training with the Toronto FC Academy in September 2012 and was invited to train with the First Team, during the preseason, impressing coach Ryan Nelsen and earning a first team contract. Osorio made his debut for Toronto FC in Major League Soccer on March 9, 2013 against Sporting Kansas City, coming on for Terry Dunfield. He scored his first goal against the Los Angeles Galaxy in a substitute appearance, in the 78th minute, on March 30, 2013. Osorio scored his second goal against New York Red Bulls on April 27 after coming on in the final eleven minutes as a sub he was able to equalize the game; however, the match finished in a 2–1 defeat with Tim Cahill scoring the winning goal. He was awarded MLS Goal of the Week 9 for the goal against New York, he narrowly beat out Andrés Romero for the award. After the 2013 season Osorio spent his off season training with Championship side Huddersfield Town and Bundesliga's Werder Bremen.

In the 2017 season, Osorio saw a decrease in playing time; largely appearing off the bench as a result of the signing of Víctor Vázquez. However he started both legs of the MLS Eastern Conference Final against the Columbus Crew, as well as the 2017 MLS Cup, a game which Toronto won 2–0 over the Seattle Sounders at BMO Field, on December 9. After a strong start to the 2018 season, it was reported that Osorio had received interest from clubs in Europe and Mexico. He went on to win the golden boot of the 2018 CONCACAF Champions League netting 4 goals in the process. In the first leg of the 2018 Canadian Championship final, held on August 8, Osorio scored in a 2–2 away draw against Vancouver Whitecaps. In the second leg, on August 15, his 200th appearance for the club, he set-up Sebastian Giovinco's goal in a 5–2 home win, which enabled Toronto to win the title 7–4 on aggregate. Osorio was awarded the George Gross Memorial Trophy as the most valuable player of the tournament, having scored three goals in four games in the competition. He signed a multi-year contract extension with Toronto on August 30, 2018, which made him one of the highest paid Canadian players in the world.

On November 10, 2019, Osorio featured for Toronto in a 3–1 away defeat to Seattle Sounders in the 2019 MLS Cup Final; the opening goal, which was scored by Kelvin Leerdam, was surrounded by controversy, however, as Osorio had lost possession in the lead-up to the goal, after being involved in a collision with Cristian Roldan, which went unpunished by the referee; Osorio later accused Roldan of obstructing him.

International career
When he was 18 he made his debut with the Canadian national program, representing Canada at the 2011 CONCACAF under-20 championship in Guatemala. Osorio has represented Canada at various youth levels.

On May 23, 2013, Osorio earned his first called up to the Canadian senior team for a friendly in the following week against Costa Rica. Osorio made his senior international debut on May 28, 2013, coming on as a second-half substitute for Samuel Piette in a 1–0 defeat to Costa Rica at Commonwealth Stadium. On June 27, 2013 Osorio was listed as a part of the confirmed 23-man squad for Colin Miller's Canada squad for 2013 CONCACAF Gold Cup. He would also represent Canada at the 2015 CONCACAF Gold Cup, where Canada was eliminated in the group stage. Osorio scored his first goal for Canada against Bermuda in a friendly on January 22, 2017. Osorio was named to Canada's 2017 CONCACAF Gold Cup squad on June 27, 2017. Osorio was named to his fourth Gold Cup squad on May 30, 2019 ahead of the 2019 edition.

Personal life
Osorio's parents are Colombian – his father is a native of Cali, while his mother was born in Medellín. Osorio's younger brothers, Anthony and Nicholas, previously played for Toronto FC II.