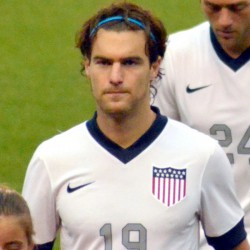 Graham Jonathan Zusi (/ˈzuːsi/; born August 18, 1986) is an American professional soccer player who currently plays as a midfielder or defender for Major League Soccer club Sporting Kansas City. From 2012 to 2017, Zusi represented the United States national team, earning 55 caps and scoring 5 goals. Zusi is the longest-tenured player to have played with one club in MLS history.

Early life and college
Born in Longwood, Florida, Zusi, alongside his siblings, was first coached by his father, David. He played high school soccer at Lake Brantley High School.

Zusi played college soccer for the Maryland Terrapins of the University of Maryland, College Park. During his college career with the Terrapins, Zusi played in 89 games, recording 28 goals and 20 assists, and helped Maryland win the National Championship in 2005 and 2008, scoring the game-winning goal in the 2008 National Semi-Final and Championship Games. He graduated with a degree in criminology.

Zusi enjoyed a breakout season in 2011 helping the renamed Sporting Kansas City franchise to an Eastern Conference championship and earning a call-up to the U.S. national team. His efforts were rewarded by Sporting with a new four-year contract announced on February 16, 2012. In the 2012 season he led the league in assists with 15.

During the 2012–13 offseason, Zusi trialed with English Premier League side West Ham United.

Zusi re-signed with the club for the 2022 season.

International career
On January 21, 2012, Zusi made his debut for the United States in a 1–0 win over Venezuela in a friendly match. He scored his first international goal on January 25, 2012, in the ninth minute against Panama in a 1–0 victory. Zusi was named to the national team's Hexagonal roster for the February 6, 2013 match against Honduras; he entered the game as a second-half substitute.

On October 15, 2013, Zusi scored a stoppage-time equalizer against Panama in a World Cup qualifier. Though the United States had already qualified, Zusi's goal meant that Mexico would advance to the next round at Panama's expense. As a result, a group of Mexico fans later presented Zusi with a framed photo and plaque with the words San Zusi ("Saint Zusi").

On March 29, 2016, going two years without scoring for the United States, Zusi scored the fourth goal against Guatemala in their campaign to qualify for the 2018 World Cup in Russia. Later that year, Zusi scored a late goal for the United States to put them up 4–0 against Costa Rica during the Copa América Centenario. His goal ensured that the 4–0 win over Costa Rica was the largest against Costa Rica in history for the national team.

Following the failure to qualify for the 2018 FIFA World Cup and Bruce Arena’s departure, Zusi was not called into the team by Dave Sarachan and Gregg Berhalter.