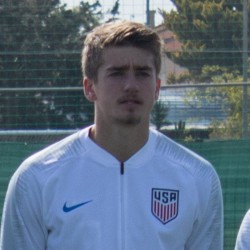 Career
College and amateur
Rennicks was born in South Hamilton, Massachusetts, and played his college career at Indiana University between 2017 and 2018, making 29 appearances, scoring nine goals and tallying one assist.

Rennicks also played for USL Premier Development League side Boston Bolts in both their 2017 and 2018 seasons.

Professional
On January 18, 2019, Rennicks opted to leave college early and signed a Homegrown Player contract with Major League Soccer side New England Revolution. Rennicks made his professional debut on March 9, 2019, appearing as a half-time substitute in a 2–0 loss to Columbus Crew SC.

On August 1, 2019, Rennicks joined USL Championship side North Carolina FC on loan for the remainder of the season.

On September 12, 2020, Rennicks joined USL League One affiliate New England Revolution II on loan for the remainder of the season. He made his debut on September 16 and scored his first goal for the club three days later against Union Omaha.