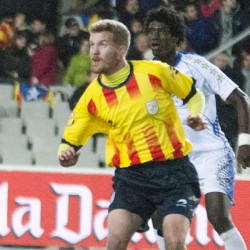 Beginning his career at Barcelona where he was only a reserve, he spent most of his career in the United States and Portugal. He won the MLS Cup in 2013 with Sporting Kansas City and also represented Orlando City SC. He played 42 Primeira Liga games for four clubs including Sporting CP, where he won the Taça de Portugal in 2015.

Club career
Barcelona
Born in Puig-reig, Barcelona, Catalonia, Rosell joined FC Barcelona's youth system in 2006, aged 14. He made his senior debut on 14 January 2012, playing seven minutes in a 1–3 away loss against UD Las Palmas in Segunda División and appearing in a further five league games during the season.

Sporting KC
Rosell signed with Sporting Kansas City of Major League Soccer in August 2012, being given the number 20 and wearing "Uri" as his jersey name. He thus became the second player to graduate from Barcelona's La Masia and play in the competition, after Albert Celades. In just his second appearance for the team, on 1 September, he scored a game-winning goal against Toronto FC, netting in the 87th minute of a 2–1 home win.

Rosell made 31 appearances in 2013, heading a goal in a 3–1 win at the Philadelphia Union in the first match of the campaign. However, in the championship game against Real Salt Lake on 7 December, he was replaced injured in the eighth minute, as his team eventually prevailed in a penalty shootout after a 1–1 draw.

On 5 April 2014, Rosell received a straight red card in a goalless draw against Real Salt Lake at Sporting Park for a foul on Devon Sandoval. On 10 May he set an MLS record, after completing 160 of 166 passes against the Montreal Impact.

Sporting CP
On 3 June 2014, Kansas City and Sporting CP agreed to a transfer for Rosell. As per MLS rules, the terms of the deal were not disclosed. He made his debut on the first day of the season, coming on for the injured Cédric Soares at half-time of a 1–1 Primeira Liga draw at Académica de Coimbra.

Rosell was sent off on 14 January 2015 in a 1–0 victory over Boavista F.C. for the group stage of the Taça da Liga at the Estádio José Alvalade, for two yellow cards in the space of three minutes. He appeared in 21 all competitions comprised in his first year, remaining on the bench on 31 May 2015 as the Lions won the Taça de Portugal in a penalty shootout against S.C. Braga.

On 30 January 2016, Rosell was loaned to fellow league team Vitória S.C. until the end of the season, playing sparingly for both them and their reserves in the Segunda Liga. He returned to the top flight for the following campaign, at Sporting's city neighbours C.F. Os Belenenses.

Orlando City
Rosell returned to MLS on 30 January 2018, when he signed with Orlando City SC via the Allocation Order. The team had acquired the top spot in the process by trading $400,000 in targeted allocation money to FC Dallas. He made his debut on 22 April, as a late substitute in a 3–2 home win over the San Jose Earthquakes.

Ahead of the 2020 season, Rosell agreed to a new two-year contract. Rosell's contract expired at the end of the 2021 season and despite being in discussions to return, he ultimately took to social media to announce his departure from the club after four seasons on 20 December 2021. Upon his departure, Rosell had made 73 appearances for Orlando in all competitions, the most for any club in his career.

Sporting KC return
On 21 December 2021, Rosell signed a two-year contract as a free agent with Sporting Kansas City, after seven years away from the club.

International career
In December 2013, Rosell was called up by the unofficial Catalonia national team for its friendly match against Cape Verde at the Estadi Olímpic Lluís Companys in Barcelona on the penultimate day of the year. He entered the field as a 68th-minute substitute for Real Valladolid's Marc Valiente, and lined up with Barcelona players Jordi Alba, Sergio Busquets, Cesc Fàbregas and Gerard Piqué as the side came from behind to win 4–1.

Personal life
Rosell publicly supported Catalan independence on several occasions, saying that he would refuse to play for Spain if requested. In 2014, he added that he would vote "Yes-Yes" in the Catalan self-determination referendum.

During his professional football career, Rosell studied for university qualifications in business, at the Chemical Institute of Sarrià and the University of Missouri–Kansas City.