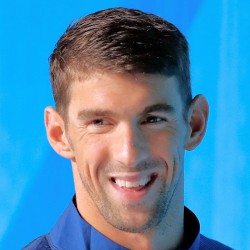 Michael Fred Phelps II (born June 30, 1985) is an American former competitive swimmer and the most successful and most decorated Olympian of all time, with a total of 28 medals. Phelps also holds the all-time records for Olympic gold medals (23), Olympic gold medals in individual events (13), and Olympic medals in individual events (16). When he won eight gold medals at the 2008 Beijing Games, Phelps broke fellow American swimmer Mark Spitz's 1972 record of seven first-place finishes at any single Olympic Games. At the 2004 Summer Olympics in Athens, Phelps had already tied the record of eight medals of any color at a single Games by winning six gold and two bronze medals. At the 2012 Summer Olympics in London, Phelps won four gold and two silver medals, and at the 2016 Summer Olympics in Rio de Janeiro, he won five gold medals and one silver. This made him the most successful athlete of the Games for the fourth Olympics in a row.

Phelps is the long course world record holder in the men's 400-meter individual medley as well as the former long course world record holder in the 200-meter freestyle, 100-meter butterfly, 200-meter butterfly, and 200-meter individual medley. He has won 82 medals in major international long course competitions, of which 65 were gold, 14 silver, and three bronze, spanning the Olympics, the World Championships, and the Pan Pacific Championships. Phelps's international titles and record-breaking performances have earned him the World Swimmer of the Year Award eight times and American Swimmer of the Year Award eleven times, as well as the FINA Swimmer of the Year Award in 2012 and 2016. Phelps earned Sports Illustrated magazine's Sportsman of the Year award due to his unprecedented Olympic success in the 2008 Games.

After the 2008 Summer Olympics, Phelps started the Michael Phelps Foundation, which focuses on growing the sport of swimming and promoting healthier lifestyles. Phelps retired following the 2012 Olympics, but he made a comeback in April 2014. At the 2016 Summer Olympics in Rio de Janeiro, his fifth Olympics, he was selected by his team to be the flag bearer of the United States at the 2016 Summer Olympics Parade of Nations. He announced his second retirement on August 12, 2016, having won more medals than 161 countries. He is widely regarded as the greatest swimmer of all time and is often considered to be one of the greatest athletes of all time.