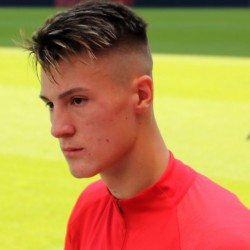 Benjamin Šeško (born 31 May 2003) is a Slovenian professional footballer who plays as a forward for Austrian Bundesliga club Red Bull Salzburg and the Slovenia national team.

Club career
Early career
Šeško began his career at his hometown club Radeče. He then played for Rudar Trbovlje, before returning to Radeče. In 2016 he transferred to Krško, where he played for the under-15s and under-17s. In the 2017–18 season, he scored 59 goals in 23 matches for the under-15s. In 2018, Šeško joined Domžale, where he stayed for one season.

FC Liefering (loan)
Immediately after signing with Red Bull Salzburg, he was moved to their farm club FC Liefering, competing in the Austrian Second League. In the 2020–21 season, he scored 21 goals in 29 appearances and became the league's second-best goalscorer. He scored most of his goals in the final part of the season, scoring 13 goals in the last 7 rounds.

International career
Eligible for Slovenia and Bosnia and Herzegovina (due to his mother hailing from Doboj), Šeško opted for the former, having represented the country at the under-15, under-16, under-17, and under-19 levels. He made his under-19 debut in a friendly game against Austria in September 2020.

In May 2021, Šeško was called up by the senior team manager Matjaž Kek for a pair of friendlies in June 2021. He debuted for Slovenia in a 1–1 friendly tie with North Macedonia on 1 June 2021. At the time he was 18 years and 1 day old and became the youngest debutant in the national team, surpassing the previous record set by Petar Stojanović seven years earlier. On 8 October 2021, Šeško scored his first goal for Slovenia in the 2022 FIFA World Cup qualification match against Malta, becoming Slovenia's youngest ever goalscorer at the age of 18 years, 4 months and 8 days.