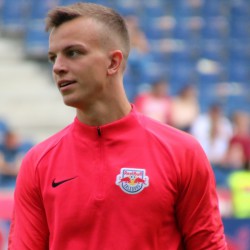 Philipp Köhn (born 2 April 1998) is a German-born Swiss professional footballer who plays as a goalkeeper for Austrian Bundesliga club Red Bull Salzburg and the Switzerland U21 national team.

Personal life
He was born in Dinslaken, North Rhine-Westphalia, Germany to a German father and a Swiss mother from Lausanne.

Club career
RB Leipzig
On 23 February 2017, the then Leipzig sporting director, Ralf Rangnick announced that Köhn will sign with the club as soon as his Stuttgart contract expires in the summer. On 4 June 2017, Köhn signed a four year deal that will keep him at the German club till June 2021. He didn't make any appearance for the club.

Red Bull Salzburg
On 6 July 2018, Red Bull Salzburg announced that they have signed Köhn from Leipzig, their unofficial sister club on a four-year contract that will keep him at the club till 31 May 2022. Since Liefering is Salzburg's feeder team, he is eligible to play for both clubs as a cooperation player. During the 2019/2020 pre-season friendly, Köhn played in a football match between Salzburg and Chelsea in the Red Bull Arena, replacing Cican Stankovic at half time. He conceded two goals from Pedro and Batshuayi as the match ended in a 5–3 loss. He's still yet to make his first team debut for Red Bull Salzburg, but has featured for Liefering 12 times.

International career
Köhn has represented Germany from under-15 to under-18 age group, before switching his allegiance to Switzerland. He has been playing for Switzerland from under-19. He currently plays for the Switzerland under-21.