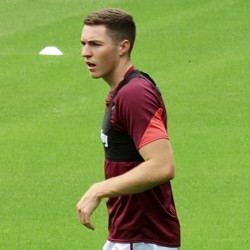 Conor James Coventry (born 25 March 2000) is a professional footballer who plays as a midfielder for EFL Championship club Peterborough United on loan from Premier League club West Ham United. He has also played on loan for Lincoln City. Born in England, he represents the Republic of Ireland at youth international level.

Club career
Coventry joined the youth academy of West Ham United at the age of 10. He scored his first goal for the under-23 team on his debut on 20 February 2017, in a 2–0 victory against Fulham. During the 2017–18 season, he played ten times in Professional Development League and four times in EFL Trophy and won the Academy Player of the Season award at the end of the season on 25 April 2018.

On 25 May 2018, Coventry signed his first professional contract with the club. About it, he said "I’ve worked for this for a long time so yes, I’m really happy to sign the deal". On 26 September, he made his first team debut, coming on as a substitute for Pedro Obiang in an 8–0 victory against Macclesfield Town in the EFL Cup. In January 2020, Coventry signed a new contract with West Ham which would see him stay at the club until 2023.

International career
Coventry is eligible for Ireland as his mother is Irish. Coventry has been capped by Republic of Ireland at under-17 level and made his debut for the under-19 team in 2018. Coventry made his debut for the Republic of Ireland under-21s in 2019 under new manager Stephen Kenny, featuring in the 2019 Toulon Tournament in which his side finished in 4th place. On 10 October 2019, he received the Man of the Match award in a 0–0 draw with Italy under-21s at Tallaght Stadium. He was called up to the Republic of Ireland senior squad for the first time on 21 March 2021, replacing the injured Conor Hourihane in the squad for the 2022 FIFA World Cup Qualification matches against Serbia and Luxembourg and a friendly against Qatar.