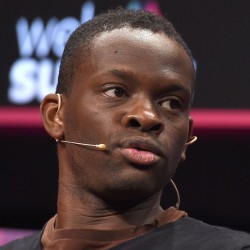 Louis Laurent Saha (born 8 August 1978) is a French former professional footballer who played as a striker. Saha was capped 20 times for the France national team and scored four goals. A former scholar at the Clairefontaine football academy, he started his career at Metz before playing on loan at Newcastle United. Before the start of the 2000–01 season, Saha moved to Fulham where he established himself as first-choice striker, helping them to gain promotion to the Premier League in his first season with them.

His performances gained attraction from Manchester United, who eventually secured his signing for around £12.4 million midway through the 2003–04 season. Injuries plagued his Old Trafford career, however he did enjoy success with twice winning the Premier League, the 2007–08 UEFA Champions League and also scored six times en route to victory in the League Cup, including one goal in the final. Despite Saha's injury woes, United star Wayne Rooney stated on Sky Sports that Saha was one of his favourite strike partners.

After four-and-a-half years at United, Everton took him to Goodison Park, where he opened the scoring in the 2009 FA Cup Final after 25 seconds, setting the record for the fastest goal scored in FA Cup Final history. He moved to Tottenham Hotspur on a free transfer in the 2012 January transfer window. Saha made his France debut in 2004 in a 2–0 victory over Belgium. He represented France at UEFA Euro 2004 and the 2006 FIFA World Cup, at which they reached the final.