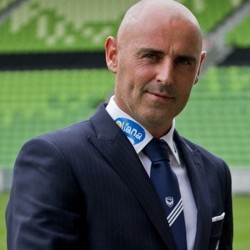 Kevin Vincent Muscat (born 7 August 1973) is an Australian association football former player and manager of Yokohama F. Marinos. As a player, he represented the Australia national team at international level winning 46 caps and scoring 10 goals between 1994 and 2006.

After beginning his professional career in the Australian National Soccer League with Sunshine George Cross in 1989, Muscat played eight seasons in the United Kingdom with Crystal Palace, Wolverhampton Wanderers, Rangers and Millwall. He returned to Australia in 2005 for the first time since leaving South Melbourne in 1996 to captain Melbourne Victory in the inaugural season of the A-league.