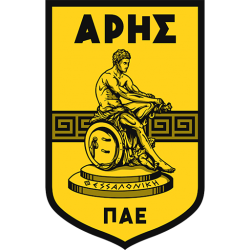 Aris Football Club (Greek: ╬Ā╬æ╬Ģ ╬åŽü╬ĘŽé) is a Greek football club based in the city of Thessaloniki, Macedonia, Greece, part of the multi-sports club A.C. Aris Thessaloniki. Aris is one of Greece's most successful club and the biggest one in Thessaloniki, having won the fourth most Super League titles after Olympiacos, Panathinaikos and AEK Athens, while they are tied with PAOK. Created in 1914 as Aris Thessaloniki Football Club, the club was a founding member of the Macedonian Football Clubs Association, as well as the Hellenic Football Federation. The colours of the club are golden/yellow, a dominant colour in the culture of Macedonia and reminiscent of the Byzantine heritage of Thessaloniki, and black. It is named after Ares, the ancient Olympian "God of War," associated also with courage and masculinity, whose image is portrayed on the club's logo as depicted in the Ludovisi Ares sculpture.

Aris was also one of the strongest and most popular teams in Greece during the interwar period. They have won the Greek championship three times (1928, 1932, 1946), the Greek Cup once (1970), and they have remained undefeated at home in European competitions in 28 home matches since 1968. The team's home ground is the Kleanthis Vikelidis Stadium.