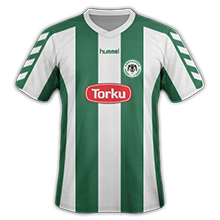 Konyaspor is a professional Turkish football club based in Konya. Konyaspor currently play in the Turkish Süper Lig. The club was founded in 1922 but then reformed in 1981. The club colours are green and white and they play their home games at New Konya Stadium.

Konyaspor was founded officially in 1922 with the name Konya Gençlerbirliği. In 1965 the club combined with Meramspor, Selçukspor ve Çimentospor and took the name Konyaspor with black and white as the team colors, and started their first season in the Turkish 2nd League. Konyaspor then changed to green and white as the team colours after its merger in 1981 with the cross-town rival Konya İdmanyurdu. The new team adopted the name of Konyaspor and colors of Konya İdmanyurdu.

In 1987–1988 Konyaspor became the champions of the second league and were promoted to the first league for the first time in history. Konyaspor lasted 5 seasons in the first league. They played 160 official matches. They ended up with 47 wins, 33 draws and 80 losses. During the same season Konyaspor made it to the semi-finals of the Turkish Cup losing to eventual champions Beşiktaş J.K. In 1992–1993, the club was relegated back to the second league. After spending 10 seasons in the second division, Konyaspor returned to Turkcell Super League as the title holders of the Second Division with 68 points in 2003. During the 2003/04 season Konyaspor made it to the quarter finals of the Turkish Cup, but then lost to eventual champions Trabzonspor 2–1 during extra time.

In 2004/05 Konyaspor advanced to the quarter finals beating Beşiktaş 3–1, but then lost to Denizlispor 5–4 on penalty shoot-outs.

Despite the 3–0 home win against Ankaraspor, Konyaspor couldn't avoid relegation as they remained 16th in the table with 38 points which meant their relegation from the Turkish Super League in 2009. Konyaspor was in the Super League since 2003.

However, Konyaspor completed the TFF First League 6th and secured a position in the Promotion Play-Offs in 2010. Konyaspor then won the Promotion Play-Offs and made an immadiate return to the Super League after 1 year. They finished the Play-Offs 1st with 7 points beating Adanaspor 3–1 in the first game, Karsiyaka S.K. 1–0 in the second and drawing with Altay S.K. 2–2 in the final match.

Torku Arena is a multi-purpose stadium in Konya, Turkey. It is primarily used for football matches of Konyaspor. It is part of complex of sports venues that are planned on the outskirts of the city, as part of the Konya Olympic Village. It replaced the aging Konya Atatürk Stadium, which has been in use since the early 1950s. The stadium has a capacity of nearly 42.276 people (all-seated) and is totally covered.

The stadium is located in Selçuklu, the main district of Konya.