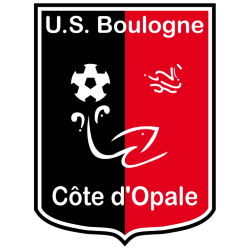 Union Sportive de Boulogne-sur-Mer Côte d'Opale (commonly referred to as US Boulogne or simply Boulogne) is a French association football club based in the commune of Boulogne-sur-Mer. The club was founded in 1898 and currently plays in Championnat National, the third division of French football, having been relegated from Ligue 2 during the 2011–12 season.

The club was formed in 1898 and its achievements are minor with their biggest feat consisting of reaching the semi-finals during the 1936–37 edition of the Coupe de France. Boulogne play their home matches at the Stade de la Libération, which seats 15,004 having previously seated only 7,000 prior to its renovation in 2007.

US Boulogne were founded in December 1898 by a group of young athletes. While they mainly focussed originally on athletic events, they moved into the football industry and made a decent job in their first few years as a football club. Boulogne won the Maritime Championship three years running between 1904 and 1906. They next won the Championship in 1909 and their final victory of this division was in 1922. In 1924, Boulogne moved to the Northern Championship and fared well. The team also did well in the Coupe de France – reaching the quarter-finals in 1929 and the last 16 three times.

In 1926, Boulogne won the Northern League and only six years later, they became a professional club. In 1935, under chairman Marcel Lacroix, the team joined the professional leagues. However, they played averagely in Division Two but there were a few bright sparks in the team. The Coupe de France 1937 competition saw Boulogne make the semi-finals, but they were convincingly beaten by FC Sochaux 6–0. After the war, Boulogne reverted to amateur status – and only became a professional team again in 1957 when they were re-elected into Division Two. They stayed in Division Two for 22 years but plummeted through the divisions – suffering consecutive relegations. The Coupe de France competition only provided little restbite, as the team made the last 16 three times.

Robert Senechal arrived in 1983 and stabilised the club in Division Four. They missed out on promotion by a narrow margin in 1984 – but were promoted in 1991. However, it was short-lived and they were relegated once again from whence they came. In June 1994, it was announced that Boulogne were in serious debt – owing ₣3 million. However, mayor and billionaire John Muselet intervened to save the club and appointed Jacques Wattez as chairman. Under the leadership of Wattez, the club adopted a new name – Union Sportive Boulogne Côte d'Opale – in July 1994. The debts of the club were wiped and Boulogne – although still struggling in Division Four – reached the last sixteen of the Coupe de France again in 1997. They earned a home tie against Ligue 1 side Olympique de Marseille. Although, Boulogne battled their way through the match, they narrowly lost 1–0.

Boulogne were slowly building their team in the Championnat National and under manager Philippe Montanier, the club clinched promotion to Ligue 2 with a tense 2–1 victory over SC Toulon. However, Boulogne were initially blocked from playing in Ligue 2 due to financial problems but after hard work, they were given the green light to play in that league for the 2007–2008 season. They struggled that season and on the final day, they were occupying the final relegation spot, one point from safety. Boulogne played at home to Chamois Niortais FC, who were one place above Boulogne. A tense game saw Boulogne win the match in the 95th minute through defender Damien Perrinelle and it kept Boulogne up whilst sending Niort down to the Championnat National.

The 2008–09 season saw Boulogne do the opposite from last season and win promotion on the final day of the season after beating SC Amiens 4–0, replacing Strasbourg in the final promotion place by a single point. Striker Grégory Thil finished top scorer with 18 goals as the side made their first ever appearance in the Ligue 1.

Stade de la Libération is a multi-use stadium in Boulogne-sur-Mer, France. It is currently used mostly for football matches and is the home stadium of US Boulogne. The stadium is able to hold 15,034 people.