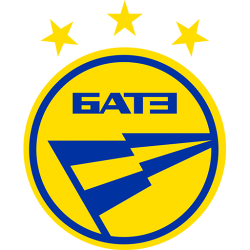 The club's home stadium is Borisov Arena, which was opened in 2014.

History
BATE is an acronym of Borisov Automobile and Tractor Electronics. The team was founded in 1973 and managed to win Belarusian Soviet Socialist Republic league three times (1974, 1976 and 1979) before being disbanded in 1984. The club was re-established in 1996. Since then, BATE have won the Belarusian Premier League 11 times and competed in UEFA competitions.


BATE playing at the Haradski Stadium in July 2009
In 2001, BATE reached the first round of the UEFA Cup, their first appearance in the competition beyond the qualifying rounds. 2008 saw BATE becoming the first Belarusian team to qualify for the group stages of the UEFA Champions League. As of 2015, BATE have played five times in the Champions League group stage, as well as twice in UEFA Europa League group stage, also reaching the knockout phase of the latter competition in 2010–11 and 2012–13.

BATE won their tenth consecutive league title in 2015, with four matches to spare. In the 2017 season, BATE drew an average home league attendance of 5,633, the second-highest in the league.

Supporters
BATE Borisov is one of the most popular football teams in Belarus. BATE fans have developed a rivalry with the fans of Dinamo Minsk and a friendship with fans of Polish club Piast Gliwice since 2011.

Borisov Arena is a football-specific stadium in Barysaw, Belarus and is the home stadium of FC BATE Borisov and the Belarus national football team. The stadium's official capacity is 13,126.

History
The first official game ever played at the Borisov Arena was the 2013–14 Belarusian Cup Final on May 3, 2014. It was contested between FC Neman Grodno and FC Shakhtyor Soligorsk and won 1-0 by the team from Salihorsk. Ukrainian midfielder Artem Starhorodskyi scored the first ever goal on the stadium in front of an almost full capacity of over 11,000.

National team matches
The Belarus national football team played its first game at the Borisov Arena on September 4, 2014, when they defeated Tajikistan 6-1 in a friendly. The first official national team game was played on October 9, 2014, when Belarus lost 0-2 to Ukraine in a UEFA Euro 2016 qualifier played in front of 10,512 spectators.