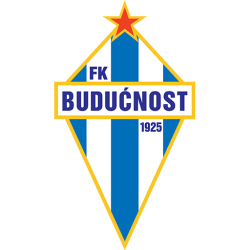 The team produced many European top-class players among whom are the UEFA Champions League winning strikers Dejan Savićević and Predrag Mijatović.
FK Budućnost is a part of Budućnost Podgorica sports society.

Podgorica City Stadium (Montenegrin: Stadion pod Goricom) is an all-seater multi-purpose stadium in Podgorica, Montenegro. Although its seating capacity changed over the years do to several renovations, as of 2019 it has 11,264 seats. The stadium is the home ground of the Montenegrin national football team and Budućnost.