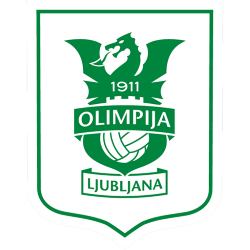 Founded on 2 March 2005, under the name NK Bežigrad, Olimpija began competing in the Slovenian Fifth League during the 2005–06 season and managed to achieve promotion in four successive seasons, reaching the top division for the first time in 2009 after winning the 2008–09 Slovenian Second League. After seven years in the top division, Olimpija won their first major trophy when they were crowned champions in the 2015–16 season. They won another league title in the 2017–18 season; during the same season, Olimpija also won the national cup, completing "the double".

Originally, the club played at the Bežigrad Stadium and ŽAK Stadium during the club's stay in the second division and during the first year in the top division. In 2010, they moved to the Stožice Stadium with a capacity of 16,038. The club played its opening match on the new stadium on 22 August 2010.

Stožice Stadium (Slovene: Stadion Stožice) is a multi-purpose stadium located in Ljubljana, Slovenia. It was designed by Slovenian Sadar Vuga d.o.o. architects and is the biggest football stadium in the country. It is one of two main stadiums in the city and lies in the Bežigrad district, north of the city centre. The stadium is part of the Stožice Sports Park sports complex.

The stadium is the home ground of the football club Olimpija Ljubljana and is the main venue of the Slovenia national football team. Besides football, the stadium is designed to host cultural events as well.