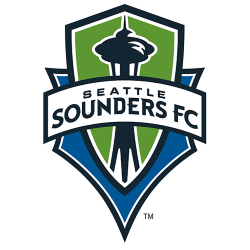 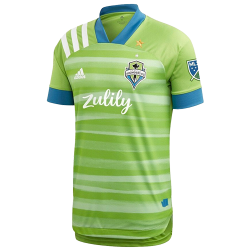 Seattle Sounders FC is an American professional soccer club based in Seattle, Washington that competes in Major League Soccer (MLS). Sounders FC was established on November 13, 2007, as an MLS expansion team, making it the 15th team in the league. Fans chose the Sounders name through an online poll in 2008, making the Seattle Sounders FC the third Seattle soccer club to share the name.

In 2009, Sounders FC became the second expansion club in MLS history to win the U.S. Open Cup, and in 2010 became the first ever MLS club to repeat as Open Cup champions. Sounders FC won a third consecutive Open Cup in 2011, defeating the Chicago Fire 2–0. In 2012, the Sounders went to their fourth consecutive Open Cup final, losing to Sporting Kansas City in a penalty shootout. In 2014, Seattle won their fourth U.S. Open Cup title, defeating the Philadelphia Union in extra time, 3–1, as well as winning the Supporters' Shield over the LA Galaxy to complete their double. CenturyLink Field is a multi-purpose stadium located in Seattle, Washington, United States. It is the home field for the Seattle Seahawks of the National Football League (NFL) and Seattle Sounders FC of Major League Soccer (MLS). Originally called Seahawks Stadium, it became Qwest Field in June 2004, when telecommunications carrier Qwest acquired the naming rights. It received its current name in June 2011 after Qwest's acquisition by CenturyLink. It is a modern facility with views of the Downtown Seattle skyline and can seat 69,000 people. The complex also includes the Event Center with the Washington Music Theater (WaMu Theater), a parking garage, and a public plaza. The venue hosts concerts, trade shows, and consumer shows along with sporting events. Located within a mile (1.6 km) of Downtown Seattle, the stadium is accessible by multiple freeways and forms of mass transit.

The stadium was built between 2000 and 2002 on the site of the Kingdome after voters approved funding for the construction in a statewide election held in June 1997. This vote created the Washington State Public Stadium Authority to oversee public ownership of the venue. The owner of the Seahawks, Paul Allen, formed First & Goal Inc. to develop and operate the new facilities. Allen was closely involved in the design process and emphasized the importance of an open-air venue with an intimate atmosphere.

The crowd is notoriously loud during Seahawks games. It has twice held the Guinness World Record for loudest crowd roar at an outdoor stadium, first at 136.6 decibels in 2013, followed by a measurement of 137.6 decibels in 2014. The noise has contributed to the team's home field advantage with an increase in false start (movement by an offensive player prior to the play) and delay of game (failure of the offense to snap the ball prior to the play clock expiring) penalties against visiting teams. The stadium was the first in the NFL to implement a FieldTurf artificial field. Numerous college and high school American football games have also been played at the stadium.

CenturyLink Field is also designed for soccer. The first sporting event held included a United Soccer Leagues (USL) Seattle Sounders match. The USL team began using the stadium regularly for home games in 2003. The MLS expansion team Seattle Sounders FC, began its inaugural season in 2009 at the stadium. CenturyLink Field was the site of the MLS Cup in 2009. The venue also hosted the 2010 and 2011 tournament finals for the U.S. Open Cup. Sounders FC won both times and new attendance records were set each year it was hosted at CenturyLink Field. In August 2013, the Sounders broke a new home field attendance record when 67,385 fans turned out to watch them play the Portland Timbers.