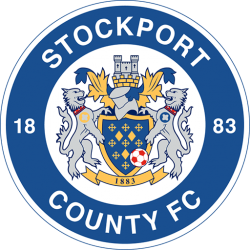 Stockport County Football Club is a semi-professional football club in Stockport, Greater Manchester, England. Formed in 1883 as Heaton Norris Rovers, the team adopted their name in 1890 after the County Borough of Stockport. They have played at Edgeley Park since 1902, traditionally in blue and white, and are nicknamed The Hatters after the town's former hat-making industry.

Stockport County joined the Football League in 1900 and competed in it continuously from 1905 to 2011. The team spent most of their history in the lower reaches of the Football League, but the 1990s were more successful with the club competing in the First Division (now known as the Championship) for five seasons, whilst they also reached the League Cup semi-finals in 1996–97. However, instability on and off the pitch eventually led to Stockport falling back to the lower divisions. The club started the 2011–12 season in the Conference National, having been relegated from Football League Two for the first time in their history at the end of 2010–11. At the end of 2012–13, Stockport were relegated to the Conference North.

Edgeley Park is a football stadium in Edgeley, Stockport, England. It was initially built for rugby league club Stockport in 1901. By 1902, the rugby club was defunct and Stockport County Football Club moved in.

Edgeley Park is an all-seater stadium holding 10,900 spectators. Home to Stockport County for 114 years, it was shared with Sale Sharks rugby union club between 2003 and 2012.

In 2015, Stockport Council purchased the stadium for around £2 million, leasing it back to the football club, in order to prevent it from being demolished and redeveloped.