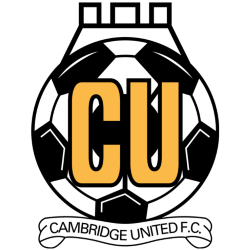 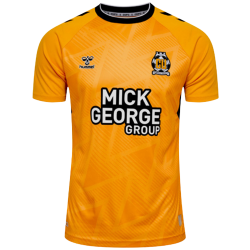 Cambridge United Football Club is a professional association football club based in the city of Cambridge, Cambridgeshire, England. From the 2021–22 season, the club will compete in League One, the third tier of the English football league system, following promotion from League Two. The club is based at the Abbey Stadium on Newmarket Road, approximately 1.86 miles (3 kilometres) east of Cambridge city centre. The stadium has a capacity of 8,127, made up of terracing and seated areas.

The club was founded in 1912 as Abbey United, and took the name Cambridge United in 1951. They played in local amateur leagues before joining the Southern League after finishing as runners-up of the Eastern Counties League in 1957–58. Under Bill Leivers's stewardship they were crowned Southern League Premier Division champions in 1968–69 and 1969–70, which helped to secure their election into the Football League in 1970. They won promotion out of the Fourth Division in 1972–73, but suffered immediate relegation. They won the Fourth Division title in 1976–77, and then secured promotion out of the Third Division the following season. They remained in the Second Division for six seasons, before they suffered consecutive relegations.

Manager John Beck led United to promotion out of the Fourth Division via play-offs in 1990 and then the Third Division title in 1990–91, with the club reaching the Second Division play-offs the following season. Two relegations in three years left Cambridge back in the fourth tier, before promotion was secured at the end of the 1998–99 campaign. They entered the Conference in 2005, after two relegations in four seasons, where they remained for nine seasons. They finished as Conference runners-up three times, being beaten in the play-off finals in 2008 and 2009, before eventually securing promotion after winning the 2014 play-off final. After spending seven seasons in League Two, Cambridge were promoted to League One as runners-up under Mark Bonner.

Although the club has traditionally worn amber and black at home, it has experimented with a number of designs of shirts including plain amber with black trim, amber and black squares, stripes and, amber with a black sash. The club had close links with Cambridge Regional College, a team that operated as a de facto reserve team between 2006 and 2014. The Cambridge United Community Trust perform a lot of charity work in the local community. Cambridge United currently play their home matches at the Abbey Stadium, which has been their home since 1932. The stadium is located in the Abbey area of the city on Newmarket Road, approximately 3 kilometres (1.8miles) east of the city centre. The closest railway station is Cambridge North, which is located about 20 minutes' walk away. Due to sponsorship reasons, between 2009 and 2016 the ground was also known as The R. Costings Abbey Stadium and is currently officially named the Cambs Glass Stadium. The stadium currently has a capacity of 8,127, of which 4,376 are seated.

Before opening the Abbey with a victory over Cambridge University Press in a friendly on 31 August 1932, United had played matches at a number of venues around the city. When playing under the Abbey United name, games were played on Midsummer Common until the outbreak of World War I. When the war ended, the club moved to Stourbridge Common and, after promotion to the Cambridgeshire League Division One in 1923, moved once again to land just off Newmarket Road in Cambridge. This ground, affectionately known as the 'Celery Trenches' due to the poor state of the pitch, was christened with a 1–0 league victory over Histon Institute and became United's home for a decade. While based at the Trenches, the club established its offices at the 'Dog & Pheasant' pub on Newmarket Road, which it used as an away dressing room on matchdays, as well as a store for equipment including the pitch's goalposts. However, the Cambridgeshire FA were unhappy with the state of the pitch at this new home, and the club moved to Parker's Piece at the start of the 1930–31 season. Despite the special significance of Parker's Piece in the history of football, it being the first place where the Cambridge Rules were played out, the lack of spectator capacity and disruption caused during games meant this move was not a successful one.


Abbey Stadium viewed from the South Stand
In January 2006, John Howard announced plans to move out of the Abbey Stadium to a new purpose built stadium in Milton. This was supported by Cambridgeshire Horizons. These were criticised by fans as risking the club's identity by moving out of the city and, despite Howard describing them as crucial to the club's future, little else was heard of them publicly. Subsequently, a new community stadium, that would also include conference facilities, was ruled out by a Planning Inspector's report which described it as unsuitable development in the green belt and in October 2009, Cambridge United announced its intentions to redevelop the Abbey Stadium with chairman.

The Stadium was sold by Bideawhile to Grosvenor Estates in June 2010. Soon after, the new landlords, in combination with the club and supporters group Cambridge Fans United, announced that they had signed a Memorandum of Understanding to positively work together to achieve the relocation of the club to a new stadium. In January 2011, plans for a new community stadium were unveiled at an open meeting, including potential new locations both within the city and outside it.

In September 2011, Grosvenor Estates announced that they, in partnership with property firm Wrenbridge had managed to cut down the potential sites to just two, both on greenbelt land. This was later cut to one, Trumpington Meadows, to the South West of the city. They revealed they plan for the new community stadium to be an 8,000 seated and terraced stadium to be built within a new Cambridge Sporting Village incorporating housing and retail development with the stadium as the focal point. However, objections from residents and local councils saw the proposal blocked in 2013. Plans announced in January 2015 keep the sporting village development at Trumpington, but without the new stadium. Instead Cambridge United will redevelop the Abbey Stadium.

In May 2015, Grosvenor had released their first sketches of potential designs for the redeveloped stadium, with plans to change the name to the Cambridge Community Stadium. At present, the main plans are to increase the capacity in the Newmarket Road End to 3,500 and to introduce safe standing. The new design will also include community facilities for public use. The Habbin Terrace will also be completely redeveloped, which will see it become fully seated and expanded as well. The main stand will also be expanded slightly and redeveloped.