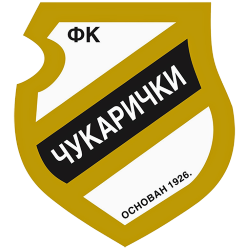 Founded in 1926, the club spent the first years of its existence in the amateur field. In the days of Yugoslavia, Čukarički played predominantly in the lower divisions of the country. The first time for a stir, the club caused in the seasons 1971–72 and 1993–94, when they reached the Yugoslav Second League respectively the Yugoslav First League, as well as in 1996 and 1997, when the qualification for the UEFA Intertoto Cup succeeded.

On 17 April 2012, the club was bought by Dragan Obradović, the owner of the Serbian construction and wholesale company ADOC. Since then Čukarički is the first ever professional football club in Serbia to have been privatized, and is also one of the first clubs in Southeast Europe which were ever bought.

Čukarički Stadium, also known as Stadion na Banovom brdu (English: Banovo Brdo Stadium) is a multi-purpose stadium in Belgrade, Serbia. It is currently used mostly for football matches and is the home ground of FK Čukarički. The stadium has a seating capacity of 4,070. As of 2013 the stadium is under reconstruction after which the planned seating capacity for the finished stadium is 8,000 seats.